With permission from a photo by Pavel Nivitski

Viewing The Wilton Diptych on the Day England Realised 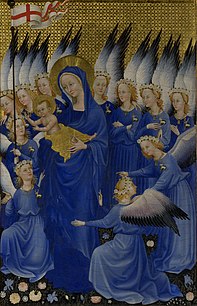 We knelt with King Richard – supplicated;

wanted to wave that pennant of St George,

which was frustratingly just out of reach.

There was no revolt; the ‘peasants’ behaved.

Why did the Virgin reward Croatians?

Why did Henry Bolingbroke take the crown?

Why is the Pope a Catholic?

All our hearts were couchant and chained today.

The shock of failure was epiphanal.

Our livery badge was the three lions.

The angel team seemed to be in clover,

while we were brought to our knees in wasteland.

After four years the Revenge Parliament

will sit.  We will challenge hollow power.

Our heraldic past was manufactured –

Our feet seemed to be made of feathers

Shrines and treasures are often portable

and they can be exchanged across countries,

like trophy WAGS.  We would have kissed the feet

of anyone who’d helped us win the cup;

not let it pass from us

into some thieving Benjamin’s rucksack.

With sainted management behind us, we,

Practising his serve.  Obviously paid off!