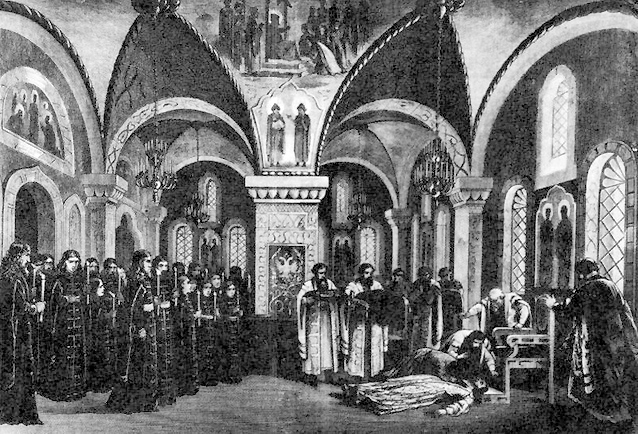 The Death of Boris

Having sung ‘I have attained supreme power’, he joins the Chorus to sing ‘The Funeral Bell’ before expiring.

I’m with Benjamin on this one, I said, sipping my Macchiato.

Yes, the cynical one.

You surprise me.  Brassie can be ironic sometimes.

Yes, we are all being taken to the knacker’s yard in a battle bus.  No one can

read what it says on the side. Benjamin had a good memory.  Things can

never be much better or much worse.  Hunger, hardship and disappointment

are the unalterable laws of life.

You surely don’t believe that, Candia?  What about the vision of Sugarcandy

Mountain?  We can build our own windmills. The Three Brexiteers

will benefit our own old and retired once again.

Hmmm, do you recall that by the fourth year of Animalism and

independence, Animal Farm depended completely on its trade with

the wider world?  Rations were reduced and lighting was cut in the stalls.

Yes, Candia, but the animals had a feeling of dignity and held

spontaneous demonstrations to celebrate their own triumphs.

Yeah, and a lot of history was re-written as well.  The animals felt

Napoleon, they were in cahoots with the Enemies and eventually

traded with whichever partner promoted their own selfish,

So, who do you reckon are Snowball and Napoleon?

I leave it entirely to your own judgement, comrade.

So, are you on your way to vote now?  Remember, old Jones was not

so bad, even if he was a Fascist.

Yes, I had better watch out for the low-flying campaigning pigeons.

I don’t want to be crapped on.  Nor do I want to be savaged by a band of

And I left, humming ‘Beasts of England’ cynically.

Brassie appropriated a couple of sugar cubes for Post-Revolution

sustenance, adjusted her Alice band and went to check  her parking

ticket on the gleaming new dog cart, between whose shafts she

Well, no one has ever seen a dead donkey.  And being interested in

etymology, I remind you that le bon mot: ‘revolution’ has the inbuilt

concept of ending up exactly where you started.

I told you I am fixated on the sestina as a poetic form!

We are one because we share in one blood,

in spite of all the centuries of rifts

and shameful practices within God’s family.

We gather in an act of reconciliation,

erasing the thromboses from the past.

Can we negate, wipe out the shameful past?

There’s an indelibility in blood.

No matter how we crave reconciliation,

we cannot will coagulation, love;

and force relations to cement their rifts.

Inevitably there will be rifts

in the heart’s polar regions; ice sheets from the past

crack, fissure, melt. And, in the family,

though connections are through blood,

they can only be maintained by love

and transfusions of reconciliation.

And every time we achieve reconciliation,

we spin the web of Love;

we dialyse those platelets from the past

and filter those corpuscles of bad blood,

for the holistic health of our family.

But what about the wider family?

If we attain reconciliation

in the microcosm of our kith, kin and blood,

could we extend goodwill to rifts

of a global nature?  In the past

progress has only come about through love.

Sharing a meal can be a sign of love-

introducing the stranger to one’s family;

cancelling out the debts of the past,

in order to gain reconciliation;

throwing out lifelines that span rifts;

being prepared to become blood-

brothers, for the sake of the human family;

ultimate reconciliation; burying of the past;

A re-blog from erstwhile…

I am reminded of one of my encounters with a Suttonford grande dame who had experienced the days of the Raj first hand.  She measured out her widowhood in coffee spoons and cigarettes at one of her favoured venues- not the Costamuchamullah Must-Seen Cafe, stylish though it be, but rather The Peal o’ Bells, Public House.

One lunchtime –cloth: on (dinner:cloth off) – she sat in a cloud of smoke, which spiralled upwards, like mist rising from The Ganges at dawn. I was moved to admire her leopard skin coat.  She minimally acknowledged my obeisance with a dismissive movement of her fag.

A few evenings later, she was leaving a drinks party which was being held to honour veterans.  The Husband and I used to be inundated with invitations to such, but lately we have found less favour from les nouveaux.  By way of something to say, I asked her where her admired coat was, as she was being solicitously wrapped in a stole by a selected minion who had been appointed to see her safely across the road.  She gave me a withering look , secure in her very U status and corrected my social solecism, resulting in this poem:

He placed the mink stole round her neck

(not the fur coat she’d worn on deck.)

She saw my look and then observed

the riposte which I had deserved:

“You don’t wear leopard after dark!”

“Precisely. It’s not the done thing.”

for dinner? One just never ought.”

“Is there any jurisdiction

on camel? Is there restriction

shibboleths on which They concur? –

a consensus aimed at non-U?”

“The proles took to fake kangaroo.

In crepuscular hours of dusk,

and, as far as Guatemala,

Minxes out in the Sahara

had bikinis of impala.

One can pose as La Giocanda

in a thong of rare red panda,

wanted bobbies to arrest us.

Darling, they’re just not one of us.

In Sikkim some said, “That’s Betty.

She’s the one who’s wearing yeti”

I would sip a margarita,

naked, on a rug of cheetah.

(I was pretty well devoured

by a rampant Noel Coward.)

He quipped, ‘Little looks much snazzier

Than zebra pants and brassiere.’

In the mountains of Bhutan,

my tippet was orang-utan

and my favourite windcheater

was two hides of tanned anteater.

(At altitude on Everest,

one needs an extra tiger vest.)

At a barbeque in Goa,

I singed my flamingo boa.

To meet the Queen, I wore a hat

and had it trimmed with a fruit bat.

There was a tiny rigmarole

when footmen took my corgi stole.

I looked at my heel:

I’m sure your carpets are quite clean.’

‘Your headgear’s what we mean.

Though denied my decoration,

I still caused a huge sensation.

I wear stoat and I wear otter,

I wore porpoise, whale and shark –

But NEVER leopard after dark.”

Couldn’t resist having a go at re-creating the NGV posters in Melbourne, advertising the Warhol and Ai Weiwei combined show….