these last few weeks, I announced.

Haven’t they had it removed? asked Carrie.  I mean, it must make a mess.

No, it has not been possible to approach it and cover it with a blanket.  It is

gathering at the font, as if it was Tracy Emin’s new sculpture based on a

Roman standard.  It literally had a bird’s eye view. 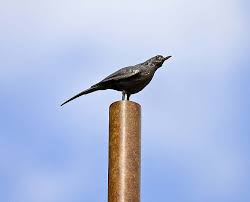 Well, Carrie interjected, a jackdaw on a roof heralds a new arrival, so it was

very apt that it should be an extra guest.

I kept thinking about the reading from the previous week, I continued,

pronounced in His favour.  I mean, a crow, or raven or suchlike is one

It is a bit creepy, though, I said.  A raven was once considered to be the

ghost of a murdered person.  This bird struts about like the one in the fable

who borrowed the finery of other feathered friends, to make an impression.

I thought jackdaws were considered to be tricksters, volunteered Carrie.

You know, because they steal shiny objects.

Oh, like in the poem The Jackdaw of Rheims?  The Bishop cursed the bird

for stealing his turquoise ring, but then reversed the excommunication

when the ring was discovered in its nest.  Eventually they canonised it and

gave it the name Jim Crow!

Carrie had been thinking :They used to have all sorts of dialect words for

jackdaws, such as cawdaw, jacko and college-bird.  But I like the collective

noun for a group: a clattering of jackdaws.

feature, I believe.  Apparently it was punished as being only one of three

creatures that copulated in the ark.

Really? observed Carrie.  I expect that it was bored being shut up for

weeks on end.  It probably had nothing else to do.

were bored, I commented. But I don’t think she had copulation in mind as

Changing the subject, interrupted Carrie, aren’t these birds supposed to be

stupid?  Weren’t they supposed to starve while watching figs ripening?

No worse than teenagers, I laughed. Some of them watch paint drying.

But, no, I think they are meant to be intelligent.  Some of them protected

saints’ bodies after execution, or saved them from being poisoned.

I suppose you are right, Carrie admitted.  If the ravens leave the Tower

we are all in trouble. 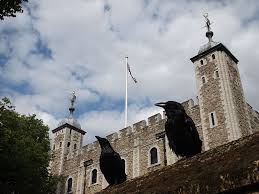 Yes, and if they stop flying around Kyffhauser, Barbarossa will awake and

restore Germany to its former glory.

I seem to remember that a jackdaw is a harbinger of rain, Carrie mused.

I suppose that means the Bank Holiday sunshine is on its way out.

We will see by tomorrow, I agreed.  Anyway, they need to get rid of it.

Someone said that if it had been in a Wee Free Church, then it would have

been driven out by the monotony of the psalms.  If it had been in a

charismatic church, it could have been commanded to leave in the name of

But it’s in an Anglican church, Carrie pointed out.

Yes, and so the solution is to immediately baptise it and then it will never be

I’ve heard that one before, Carrie groaned.  But they should do what The

church near to his home.

What was that? I asked.

Bring in a couple of sparrow hawks, she said.

And the swans will sing when the jackdaws are silent? I suppose.

That’s the general idea.  Failing that, give it a saucer of oil and it will

admire its own reflection and then someone can creep up on it.

Right! You’d better phone the vergers’ office then.  You can always

pretend to be from the RSPB, I suggested.  Just don’t quote Psalm

Why not? she asked.

we are all trying to drive the poor thing out. I bet St Francis wouldn’t have

Lesson for the day, I stressed.  But try persuading Nigel Farage!