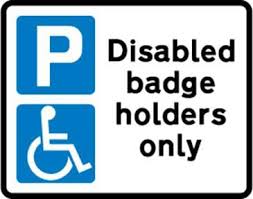 Magda, Ginevra’s carer, had passed her driving test and she was ready

shop, housed in a barn, which also retailed garden ornaments, tubs and

plants, in addition to scented bits and bobs.

Magda executed a confident manoeuvre into the disabled bay and she

placed Ginevra’s Blue Badge onto the dashboard, before climbing out in

order to assist the old lady with her zimmer frame.  She would have to stand

for a few minutes until the collapsible wheelchair could be assembled.

and barked: You don’t look very disabled to me, young woman!

Translated this clearly meant: I think the world owes me a living and I have

an inflated sense of entitlement, so give me what I want: now!

Magda stared with incomprehension: Excuse, what is your problem?

She can walk, can’t she? the obnoxious female continued to rant, indicating

Ginevra with a directional movement of her expensively low lit hair.  Both limbs

seem to be attached.

Ginevra, who was a little aurally challenged, rolled down her window and

enquired: What does this annoying woman want?

She want your parking place, I think, explained Magda, opening the door.

By this time, the woman’s exhaust fumes were causing Magda to cough. See,

she spluttered, pointing to the dashboard: The lady has the Blue Badge, innit?

Oh yes, sneered the woman.  But it has all been changed.  It is based on

Ginevra took a sneaky sip from her hip flask, which increased her Dutch

courage- as if she needed any boost!  She addressed the woman thus:

I can’t see your legs, you insolent parvenue, but if there was to be an

independent judgement, I dare say that these would win!  She swung her limbs

out of the door, revealing rather slim ankles and two shapely calves.  These

odd years. They kept me vertical when I served tea to wounded soldiers.  So

let’s see yours then! Walk up and down and we’ll see who has the best pins

The woman jumped out of her car, seething and Ginevra laid into her.  As I

thought: elephantine!  And where’s your badge?  Is it a Blue Peter one that

you bought on Ebay?

other.  She reversed sharply and- crunch! she collided with a large garden

statue, shattering her rear light and damaging her bumper.

Quick!  Note down her number. Magda, shrieked the old warrior.  We need to

report her for careless driving and criminal damage.  She moved incredibly

speedily towards the vehicle.  Her tax disc is out of date! she crowed.

Then, exhausted, she flopped into her wheelchair.

Two witnesses emerged from the barn, having seen and heard the whole

episode from the porch, where they had been inspecting frost-proof pots.

That looks terribly expensive, said one to the other.  She’s left most of her

bumper littered all over the display.

She picked it up.  It said: All Breakages Must Be Paid For.

Did you get her number? the first one asked Magda.

Yes, said one of the women.  And she’s broken its arms too.

Ginevra didn’t enlighten them that it was a reproduction of the Venus de Milo.

Still, it was a very satisfying start to her outing. And the girls in the coffee

shop gave her a free sweet beverage , in case she was in shock.   While

Magda was looking at the cake domes, the sly pensioner slipped a little

brandy into the cup.  The waitresses even insisted that she take the table

kept it on a sunny window sill.

took a statement from them were so young- looking! One of them reminded her

She asked him if he played the piano, but he merely looked puzzled

and asked her if she could try to focus and keep to the point.

Threatening and menacing behaviour you say, Mrs Em- what did you say your

mobile number.  She wasn’t phased.  After all, her passsport was in order.