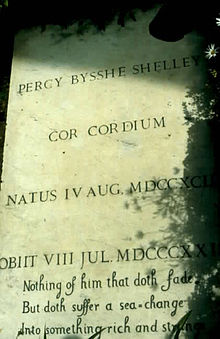 (P B S’s gravestone in The Protestant Cemetery, Rome.

‘Cor Cordium‘ was inscribed on Shelley’s grave and means ‘heart of hearts.‘

placed between the pages of a book, at her husband’s poem on

Keats: ‘Adonais.‘  It can’t have been the whole organ, so must have been

a sliver which was saved from immolation on the beach at Spezia.

casket. It was meant to be taken to The Holy Land, but Douglas failed to

dispose of it there, so it returned to Scotland.

Hearts were often removed and, like Thomas Hardy’s, were buried

separately from the rest of the remains.

It is rather ghoulish to ponder on what Isabella had in her pot of basil,

or what Walter Raleigh’s widow carried around with her in a leather bag.

Yes, sometimes it was a head and not a heart.  People can be weird.

(I don’t know what you have to feed basil, the herb, with, but I never

seem to  have any luck with growing it in a pot.  Isabella seemed to be

quite successful, judging by Holman Hunt’s painting, but I don’t think

Monty Don would prescribe such an extreme compost.)

Anyway, my next dramatic monologue references Mary, in later life,

meditating on their September voyage up the Thames, in the

company of Charles Clairmont and the novelist Thomas Love Peacock.

They failed to reach Cricklade and the source of the river and, in any

case, did not have the £20 to pay the navigation fee for their skiff to

enter The Severn Canal.  So, they stayed two nights in Lechlade and

on ‘Tripadvisor,’ had such a site had been in existence.

viewed a bedroom which MIGHT have been the one in which they lodged.

the snowdrops, which they certainly would not have done, their visit 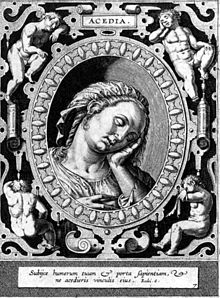 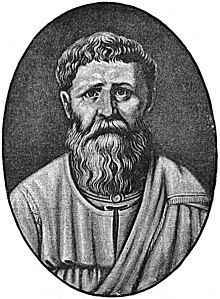 Boothroyd-Smythe and Peabrain Minor had actually

impressed Mr Augustus Snodbury with their results in

He walked into St Birinus Middle’s staff-room and bumped

into Nigel Milford-Haven, whose countenance was somewhat

crestfallen, since he seemed to have  been issued, via his

pigeon-hole, with a dreaded luminous pink notification that

he had a cover lesson after break.

It wasn’t fair.  He had a bit of a sore throat.  Whatever member

of staff had phoned in on this inauspicious morning simply

couldn’t feel  worse than he did at that precise moment.

What ho, old boy!  I have just received the equivalent of some

gravitational waves which have issued from those two infamous

Nigel looked puzzled and he frankly wished to avoid such an

encounter, as once the old buffoon revved up, there would be

little chance of being able to seize upon one of the scarce, but

To wit, that this is a cataclysmic event, only to be celebrated in

greater style by the University of Glasgow, after its global contribution

to astrophysics and cosmology.

I’m afraid that you have lost me, sir.

Ahh, if all of us in the learned profession were to switch on our educational

detectors, then we would possibly be able to receive signals, whose dimension

might be the equivalent of a trillionth trillion of an atom.

Education is a project which can seem fruitless.  It can appear a thankless

task for decades. We must remain ever-vigilant and note the slightest

pulsation of a neuron!  Posterity may depend upon it.

A ripple passed through the staff-room, as one or two of the older

members of staff who were familiar with the overly metaphorical style

of The Senior Master lowered their newspapers for a nanosecond, in

order to make an infinitesimal response.  This reaction might have

registered with Nigel, if he had not been utterly consumed by the

shattering paper communication whose imperative had shredded any

hope that he had harboured for a respite period, after teaching his least

favourite class of the day.

Now he would never have time to sort out quelque chose for Valentine’s Day.

Drusilla would be so disappointed in him.

But, hold on!  That pink paper was not a cover slip.  It bore an embossed

depiction of a Cupid, or a cherub.  Was this some sort of a trick?

Snod took the missive from The Junior Master’s trembling hand.

Excuse me, but I think this has been delivered to the wrong pigeon-hole.

It is clearly addressed to me.

Like a prestitidigateur, he conveyed it to the inner pocket of his Harris

Tweed jacket, with aplomb and surprisingly little sign of embarrassment.

of such a recess. The last time Gus had emptied his breast pocket he had

attempted to explain to his English class:  Ambivalence.  His mental universe

seemed to be imploding.  When it came to affairs of the heart, he felt like

Philae hitching a lift on a comet.  He hoped that he would not come unstuck, 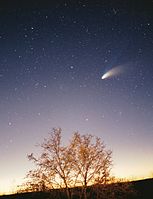 Did you have a good day? asked the receptionist, as they checked Aunt

Augusta back into Snodland Nursing Home for the Debased Gentry.

‘Good’ if you were a galanthophile, piped up the aged one, who couldn’t

have been so tired after all.

Oh, replied the receptionist.  People have been rooting up snowdrop bulbs

and selling them for vast amounts of money.  I read about it in The Daily

Gus was blissfully unaware that such a fount of information existed.

library trolley, commented Aunt Augusta.  That is, if thieves read.

What book was that? asked Dru as she settled her back in her room.

Tulip Fever, her great-aunt answered, looking as if her niece was

But that was surely about tulips? replied Dru.

aunt, so arranged to see her later in the week.  They were hungry and

tired, so set off for Hengist, a restaurant in Aylesford which was in a

Who was Hengist? asked Dru, back behind the wheel.

Some Viking chap who landed in the area in the fifth century, replied Gus.

I hope rotten fish and putrescent reindeer aren’t on the menu, said Dru,

They managed to secure a table, even though it was nearing Valentine’s Day.

The waitress gave them a funny look.

You know, Gus said, talking with his mouth rather full, which was not his usual

wont.  You left me rather a long time with the old girl.  What was so riveting?

Dru looked round the room.  Well, when I went to the Portrait Gallery, I could

only see representations of all those fair-haired, rather effeminate types in

velvet knickerbockers.  None of them looked remotely like us. No, wait!  Then I passed the old schoolroom and there was a sepia photo of

No.  But the weird thing was that their tutor looked exactly like us around the

chin.  And, weirder than that, his name was Anthony Revelly.

Should I know him?

who pestered Aunt Augusta the other night?

The one who called her by her sister’s name?

How could he have known…?  Oh, my goodness- yes!  I see what you are

saying.  He must have been my mother’s lover, the man we used to visit

He is your father and my grand-father, supplied Dru.

He mistook Augusta for her sister, Berenice.

Too many missing relatives turning up, said Gus.  Order me a Cognac