daughters with their dowries?

The final -for now – utterance from Jane Austen’s  position under the floor of Winchester Cathedral.

Isn’t it incroyable that I can see the theme from one of my most famous novels visually sculpted on the face of the Tournai font, just opposite my place of rest?  Yes, dear Reader, it shows an impoverished nobleman who cannot afford to give his multiple daughters a grand dowry.  St Nicholas steps in and saves the day. (Not saves the bacon: that is shown on the other face, where the boys are preserved from becoming sausages, organic or otherwise.  I did not like to borrow that particular myth for any of my novels, however.)

I am aware that I have the best social position- a place that may not be recognised by the critical Mary Crawfords of this world, who know nothing of worship, who speak insolently of men of the cloth and who seat themselves prematurely during processionals.

I still scrub up well, as the Holy Dusters employ some vim and vigour in polishing my brass plaque with Duraglit and elbow grease.  Shadows of the clergy and laity cast their shades across my stone, revealing in their rites and rituals the universal foibles and fancies of humankind.  My joy in observing how we all rub along together has been passed down, along with my writer’s mantle to my handmaiden, Candia.  Hear her and follow her blog with due diligence and  enthusiastic approval, for I being dead yet speak! 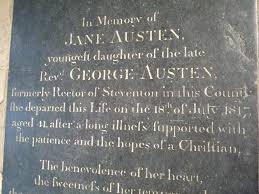