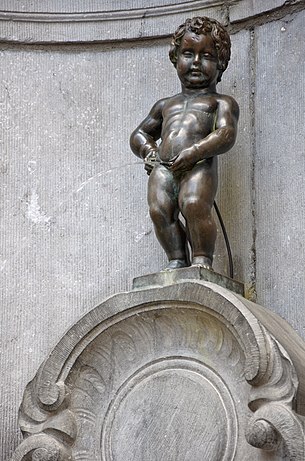 Gus was meditative.  What was he going to do about the latest

Retirement had been a shock to his system.  Living in Virginia’s

house had been a mistake.  He was institutionalised.  He admitted

it. He liked the company of males and thrived – throve?-in a boarding

Virginia was set in her ways.  As former PA to The Headmaster, she had

been used to directing operations.  Trying to accommodate both her way

and Snod’s little foibles in one domestic situation was tough.  The first

entire Wisden collection in the sitting room.  She had suggested storing

his beloved books in the garage.

The house was hers.  She had owned it outright since widowhood.

But this morning was a step too far.

He had been downstairs in the Little Boys’ Room and lifted the seat.

He felt like the Manneken Pis in sub-zero temperatures.  In other words,

From somewhere in the toilet bowl direction he heard Theresa May’s voice.

Or was it Angela Merkel’s?

There was a spooky gizmo attached to the rim and a verboten notice: Halt,

Snod tore the gadget off and attempted to flush it down the loo, but, of

course this was not an effective strategy.  He had to hook it out.

What are you doing, love?  Virginia’s dulcet tones could be heard

approaching. You’ve been in there for ages.  Are you all right?

If Nigel wants to transition to a sitzpinkler, let him!  Snod seethed.  I

have always told my pupils to stand up and be men!

And he took the S.P.U.K device and crushed it underfoot.  For a

well-read individual such as himself, he wasn’t going to give up

his convictions about Cartesian mind/ body relationships- even if it

threatened other connections.  Koestleresque ghosts in the machine

ought not to invade such a monastic cell.

If Virginia thought she could follow him where no other had dared, she