Photo by Husband of Candia – under strict instruction.

At present it really is raining cats and dogs, stair rods or

whatever non-EU idiom you care to employ.

The automobile is finished.  For those who can’t afford

a carriage, they’ll just have ‘to look sweet on a bicycle

It’s all about Higher Maintenance, I reminded myself as I pushed aside half of an unsaturated Skyberry Slice.  My friend had once observed that, at a certain age, it was one’s face or one’s bum.  All those Wallis Simpson types have no reserves when the blubber is really needed.  My friend’s father told me this years ago, and, he should have known, having worked on the Burma railway.

Yes, but I thought blubber was for whales.  I have tried to exercise in all this rain, but when I went out for a power walk, a woman tripped me up with one of those Nordic poles and as there is no tread on my Coltsfoot wellies, I nearly broke my neck.  Also, those items of footwear are expensive, so I don’t really want to get them dirty.  I know my couch potato, rain-avoiding existence is giving me a rear shelf like a boy racer’s spoiler, or like the back view of Serena Williams, but I don’t have her self-confidence to flaunt it in a pair of cyclamen knickers, on the High Street.

Rain has stopped my play over the last two months. I’ve had to cancel several open-air events. My portable candelabra would have been extinguished at Cringe Park Opera and my retro-look, Bisto-ed seamed “stockings” would have run at the Big Band Forties Event.  Dripping gazebos!  Will it never stop?

My only consolation is that my neighbours’ trampoline is so slippery that it is an ‘elf and Safety issue and their swimming pool has been commandeered by a family of ducks.  Kebabs and salad are reduced on the supermarket shelves.  Petrol consumption is down and torrential rain washes off the pigeon poo on my car.  The downside is that I will eventually surrender and put the heating back on.  It is okay if you are a pensioner with a heating allowance.  Then you could be a bit more relaxed about wearing out your designer wellies.  You could afford to replace them.

The hosepipe bans have been rescinded.  Good, because if any of those sou’estered kids squelch on that trampoline once more, they will get the full force of my water cannon.

in a shower of rain.

He stepped in a puddle

right up to his middle

and never was seen again.

It was probably a sinkhole caused by road subsidence, showing the short-sightedness of local councils neglecting the infrastructure and drains. This costs us all more in the knock-on effects of reduced medical services.  It is probably the explanation as to why, for ‘elf & Safety reasons, you won’t get a GP out on home visits if there is a spit of rain forecast and that effectively means that you will never get a home visit. You couldn’t reasonably expect the medical profession to endanger their lives- not even on their current salaries.  So, if you are experiencing resuscitation attempts from near drowning, after being rescued from your rooftop by lycra-clad firemen in kayaks (you wish), don’t expect a GP to make himself available for the signing of your death certificate.  That is, not unless there is a cremmie fee due.  Then you would see them swim, larded up like David Walliams, just to get their waterproof nibs on the dotted line.

Also, don’t expect a traditional burial in a churchyard.  The coffins all floated away in the flash floods and spiralled out to sea, via some estuary or other.  So, it looks like Full Fathom Five we all will lie. Quite poetic really.  Better than Ilkley Moor and its worms.

What can one do in all this rain?

I thought that a musical might be distracting.  But not that one.  I prefer Ernie Wise to Gene Kelly and know how Eric Morecambe must have felt with gutterloads of rainwater gushing over him, like The Horseshoe Falls.

Apparently Gene Kelly had researched and practised his seemingly effortless routine so much that he almost contracted pneumonia from dancing in his permanently waterlogged woollen suit.  GPs take note: not all medical conditions can be put down to viruses. 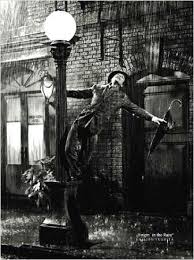 Probably by the Autumn, I cogitated, we will all have inhaled so many mould spores that the authorities will run out of flu vaccines and the old lady’s friend will do for so many of us that George, or Gideon, or whatever he is called, won’t have to worry so much about where all those heating allowances will be coming from. The medics tell us that you can’t contract pneumonia or flu from a chill, or from getting soaked. But surely, it can’t help.  If everything is down to a virus, they do not have to step out of their over-heated surgeries to see you and then they don’t have to ruin their wellies, or break their budgets on antibiotics.

Stop arguing you two, I thought Ophelia might have said. It’s very big and it’s all over the weather map of Central Europe for August.

The Weather Girl was now wearing her Coltsfoot galoshes, not to mention a Mae West flotation waistcoat.  It didn’t matter what she was wearing underneath, even if it was two sizes too small.

Prince Charles had presented the Weather and you didn’t see him wearing ill-fitting Gieves & Hawkes.  He might be an old buffer, but he has won sartorial awards. His jackets fit like a glove, if you could forgive the mixed metaphor.  Even Camilla accepts that she is no longer a size ten, even though she was never any kind of weather girl herself.  She had other assets, namely that she had the sense never to rain on Di’s parade, though she might just reign over us.

How on earth are they keeping those torches alight- re-igniting birthday candles?  The rain must find its way through those perforations. The Greeks never had that sort of problem, though they have plenty of unrelated ones now.  Maybe they could capitalise on the success of Mama Mia and do a re-make with Colin Firth in a wet t-shirt performing an updated Singing in the Rain number.  We could donate some H2o in the spirit of EU solidarity.  Maybe they could sequel Shirley Valentine and we could send them Ann Widdecombe as an ageing Shirley, though she would probably have to be told it was Shirley Williams that she was to portray.  Still, she is fairly good at rocking the boat and would enjoy the attention.

Somewhere I had heard that Federer might be toting one of the torches.   The Greeks used to transport the flame au naturel, but I didn’t dare to hope that he would oblige, noblesse or not.  If he did, the whole of Europe would unite, not to say ignite!

I found it hard to imagine Andy trailing a torch through dreich Dunblane, even if Alex Salmond was cheering him on and the Perthshire Pipe band were playing I would walk five hundred miles, with soaking sporrans and waterlogged chanters.  No, Andy, accept it: the entire female population of the United Kingdom, minus your mum and possibly the ever-faithful Kim, carries a torch for Roger.

I felt sad for Theo Paphitis. If he was going to take over Robert Dyas, it was a bad year to sell gas barbecues.