Based on the James Turrell artwork at The National Gallery

of Australia in Canberra… 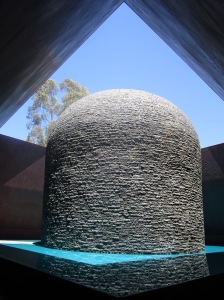 We have chanced to wonder at the Skyspace

and find ourselves drawn down the sloping path

to the Victorian basalt stupa.

We enter through a portal, so smoothly,

as if flies had followed the labyrinth

of a cochlea, or had gained entrance

to the gentle spiral of a snail shell,

only to hear a quiet ululation.

The universe is made immanent and

we sit on a concrete bench, out of time,

a shape like a whale, but all is cloudless.

We are alone and yet we are connected,

within; without – experience distilled –

interior and exterior are

Are we in a maharajah’s tomb, or

Pharoanic chamber? We are infused

by a laser beam of cosmic insight.

The world tilts on its axis and we see

segments of reality as they change,

until the sun adjusts its slanting beams,

casting a gnomic shadow on us,

branding us with a present awareness.

No clutter of materiality:

there’s only an uncanny sense of peace.

At some point the operculum descends.

Either our eyes, or the oculus blinked. 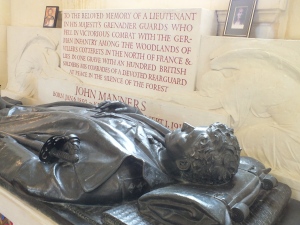 Over the graveyard’s barbed wire fence I spot

two white horses, as if through a gun sight.

My lens fails to foreground a red poppy

spared from mowing round the War Monument.

Can I see clearly down a century?

but then it was an early morning mist:

Lt. Manners squinting down the ride,

looking for a paternal miracle.

But no one wagered on this outcome.

There was no unexpected coup de grace-

the response rather from artillery. Bronzed youth leans his head on his haversack,

while dreaming on his military mat.

In the peace of the Rond de Reine he meets

she of the seraphic face on doors

and oculus of this sanctuary.

They embrace in an Indian summer.

She rests in Clovelly; he in the Retz-

While, for the next six years, Lady Constance

stares out of a different window each day,

at Avon Tyrrell, but she never sees

her heart’s desire.  And so she goes to them.

She’d yearned for an Apocalyptic steed:

a pale white Pegasus which would bear her

beyond the realms of possibility,

to meet both children on the moors once more;

to laugh with gypsies; listen to birdsong.

At peace in the silence of the forest,

the sharp sting of death is now neutralised

in a temple of togetherness, lulled

by the gentle Te Deum of the bees. The wager refers to Manners’ father who won The Grand

National and with the proceeds of his bet, built Avon Tyrrell.

Lt Manners’ older sister died in India, of cholera and the

church is a memorial to her.

Lt Manners was an Old Etonian and other school friends lost

their lives in the same rencontre.

Avon Tyrrell had 365 windows, being a ‘calendar house’.