A gardener gave us brief directions

and we walked to Holy Trinity as

and curled up comfortably on its wall

was a very tangible companion.

Could this be a descendant of ‘step-cat‘

who ruled The Kilns; dominated the dog?

This was where Jack took his first Communion:

a mouse, finally captured by a cat –

or the quarry of The Hound of Heaven?

He didn’t metamorphose from a dog

immediately and other felines

did not recognise him as kin at first.

they can be Pharisees who stare you out.’

the grave which nobody was visiting.

I placed two purloined Heartsease on the stone,

Joy’s introduction of a Siamese.

That church cat was cool.  It was convinced that

its whiskers could pass through a needle’s eye.

Lying in rows, there were sheep and some goats.

Often we don’t have an inkling as to

which is which: we transform at different rates.

Could this have been the cat who comforted

souls in the charnel houses of old?  Or,

could it have been an erstwhile canine?

For this creature’s inscrutability

And all the while, it did not spring away,

but purred me towards an unseen lintel.

maybe some kind of cosmic benison.

But suddenly it was gone and a smile

seemed to hover over the whole graveyard.

I still believe in invisible cats.

My chin was resting on the narrow ledge

and my hand sensed where to find the button.

I pressed: the drama slowly evolved.

a Mountain Hare…  Was there an Arctic Fox?

My memory is blurred, just as the light

gradually dimmed and a square of blackness

or perhaps a further impatient press,

on the mise-en-scene and, where there had been

of crinkled beech, now there was dazzling white

and a sparkling winter wonderland, with

I rushed to stamp my welly-prints in it.

There were only two seasons, I recall:

autumn and winter.  There was no vernal;

There was no aestival, with growing young.

There only seemed to be approaching Death

and a brief, glittering transformation

before darkness set in.

It was not there.

I sought in vain for the diorama

when I made my last Glasgow pilgrimage;

no grandfather to hoist me up the steps.

at least from its old Clydebank/ Partick route,

where it stopped at the grandiose facade

of a Santiago in red sandstone.

on four years of study under the spire

of grimy, but Romantic Gilmorehill.

I ask where my springs and summers have gone.

I no longer need a hand to ascend;

can see in the mirror my auburn fade

with growing sense of metamorphosis.

Camouflage did not help them to survive-

except in the memory of a child. 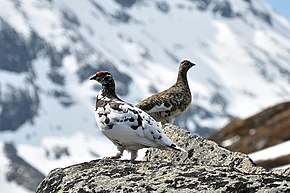