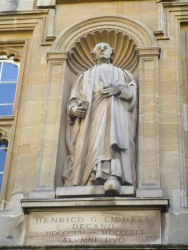 (father of  Alice, as in ‘Wonderland’)