Ginevra and her granddaughter had been getting along very well ever since Tiger had started to record the story of her grandmother’s roots in Scottish/Italian culture.

Ginevra had been dewy-eyed at her own reminiscence and even Magda, her carer, had been seen to wipe away a tear at the tale of Ginevra’s first love for Gianbattista Pomodoro, whose father, Luca, had been an early immigrant to Glasgow and had started up his ice cream parlour business modestly, graduating from a handcart to an Art Deco café, complete with soda jerk gadgetry.

Born in 1885, he had fled poverty, in the same way that Nardini and others had arrived in that cold and dreich country.  Luca’s Tuscan first wife had been tragically killed when a section of guttering had fallen from a tenement roof and struck her on the head.  He married Catherine Reid, in 1920 and she helped him to expand into fish and chips with the help of a business loan from the Societa di Mutto Soccorso.  Gianbattista was born in late 1920 and he and Ginevra, who had been working in one of the cafes, spent some passionate months together, going down to the ice cream cafes in Largs for day trips, before Gian had been tipped off that the Aliens Order Act was about to be enforced and internment was a very real possibility for him.

He escaped in time and returned to a town on The Gothic Line, in the province of Lucca, where some of his relations still lived and assisted the Allied troops as much as he could.  Ginevra had been heartbroken, but when Gian returned, the relationship had cooled.  His mother heavily depended on him, as she had been widowed five years into her marriage.  She was assisted in the business by a very capable young woman called Jean Waddell and she stole Gian’s heart on his return, but not in a malicious, predatory way. Ginevra accepted that the flaming jet had reduced to the gas being at a peep, as they say in these parts, but she was fond of Jean herself and bore her no personal grudge.  They were able to remain friends. 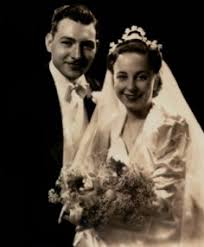 At this point Tiger turned to a black and white photo labelled 1946- Jean and Gian’s wedding photo.  Ginevra was in the guest line-up, looking brave and chic with a Forties costume and crimped hair and lots of lipstick.

But, wait a minute, Gran, that’s Mum’s grandma, surely.  I’ve seen this photo before, up in Scotland, at Grandma Morag’s house in Pollokshields.

What are these letters, gran?

Ah, these are my love letters from Gian.  I kept them all these years, but no, you can’t see them- not even for your project.

What about these other ones ?

Oh, from Jean? We corresponded for many years, until she went into the home.

And so you met Grandpa Brewer- Mead afterwards?

Yes, on the rebound, as folk say.  He had a job in the liquor trade and came north to do business with a distillery and we met in The Silver Slipper Café, just outside The Botanic Gardens, where I was working.  Great Western Road, it was.

Did you love him as much, gran?

No two loves are ever the same, dear.  We got along just fine and he was amusing and charming.  When I was buying an ice cream at the counter, he stuck a chocolate flake in my cone.  We called it a ‘99’ in those days.  We went for a walk in the glasshouses  and things got rather steamy afterwards.

Gran!  Tiger did not want to know those details.

So when did you get married?

In January, 1955. Rufus was working in Leeds, with Tetley’s by then and so we moved to Roundhay and your Aunt Victoria was born late in 1955.  Your father came along in 1960.

What was your name before you were married?  Tiger was noting some of the dates down, to draw out a family tree.

Piccololiverna- Ginevra.  It means Juniper berry, I think.  My father thought Ginevra de’ Benci was the most beautiful of Leonardo’s portraits.

Tiger thought for a moment and then blurted out:

But isn’t gin made of juniper berries?

But how did Mum meet Dad, then?  Isn’t it all a little bit- what’s the word?-incestu-something?

Oh, you’ll have to ask your mother that.

Ginevra was getting tired and Tiger had been told to restrict her inquisition to half an hour, as the old lady was ninety three, so the juvenile genealogist switched off her phone and asked Magda, the carer to pour her gran a drink.

But she has had two already! said Magda.

Ginevra pricked up her ears.  Third time lucky! she laughed.

Piccololiverna seemed a very apt surname for such a lady, thought Tiger.  But she didn’t say anything other than arrivederci!  And that was because Tiger was beginning to grow up.  She could hear her grandmother singing softly as she went into the hall to collect her schoolbag:

It’s time for us to part.

Save the wedding bells for my returning…

Please be sure the flame of love keeps burning.

Her favourite record by that man with the glass in his hand.  What was his name?  Dean Martin?  He liked a drink too, by all accounts.

Just give her more tonic.  She might not notice, suggested Tiger.