Sonia contacted Fiona Bruce and art expert, Philip Mould, after watching the BBC programme Fake or Fortune? There had been an invitation to approach the team with enquiries regarding any unauthenticated artworks which might be by famous artists and which the viewers might own.

There had been a portrait of The Laughing Cavalier over Sonia’s marble mantelpiece at Royalist House, High Street, Suttonford, for a long time.  Had her late husband bought it at auction?  Had it always been there?  She could not remember.  It had seemed a permanent fixture of her life and she was not disconcerted by the way in which the eyes followed her around the room.

Of course, she didn’t think it was the, the one and only portrait of the debonair gentleman, by Hals.  She had been paying attention to the discussions on the programme about sleepers, works after so-and-so, in the manner of, and works from the studio of etc.  She knew that copies were made and sometimes the master would work on-(say) the face of a sitter and then his apprentices would fill in the lace and drapery.  A bit like painting by numbers, she thought. Still, it would be interesting to get an informed opinion and she might get onto the show.

If it turned out to be authentic then she would have to sell it, as it would be uninsurable in a private house.  However, proceeds might help with her gas bills. Osborne and Cameron were sure to strip pensioners of their winter fuel allowance and it was a big house to heat.  So, the moment had come to see if the portrait would more than wipe its face.  (She liked that phrase, much utilised by Tim Wonnacott.)

Sonia would dearly have liked to know if the picture was worth millions or not.  Many of her visitors thought privately, that, since she was a clairvoyant, she should have been able to work it out.  Couldn’t she have looked into her crystal ball and made as worthy a pronouncement as some of the obscure experts in Amsterdam, or Haarlem?

She had looked at her falling shares and asked her friend Clammie to e-mail the London Gallery where Mould worked.  Reading Tarot cards part-time was no longer covering her addiction to Marlboroughs , nor to double espressos from Costamuchamoulah café.

She averted her eyes from the Smoking Kills warning on her ciggie packet.  It was a trifle histrionic, she thought.  After all, she had sat in a veritable pea-souper for twenty or thirty years in her sitting room and she hadn’t smoked out the ghost of the fugitive cavalier who had taken up abode in the attic after his escape from The Battle of Suttonford, 1644.

No, one could still hear him tinkling the keys of her late husband’s harpsichord of an evening.  As for the other cavalier- well, he wasn’t exactly laughing, but then he never had been.  The title was a Victorian invention.  She would say that he had an enigmatic smile and that it wasn’t clouded by the thick layer of brown tar which, an opinion which, a few weeks later, Fiona Bruce reinforced by pronouncing what might have been termed discolouration, a wonderful patina.

Smoke might get in people’s eyes, but she thought that the perpetual ectoplasm streaming from her lips gave her a Madam Arcati-like air.  She therefore approached the analysis with a blithe spirit and what she hoped was an open mind.

Over the mantelpiece there was now an empty rectangular space, which revealed the original colour of the flock wallpaper.  She felt that very soon she would be able to sneer at Froyle’s Auction Rooms, who had snootily estimated the picture to fetch between £20-30.  They mentioned chocolate box lids, McEwan’s Export cans and other humiliating images.

We’ll show them, she inhaled deeply.

She didn’t know how everyone in the town knew when the verdict was to be given on the programme, as she thought that she had kept it a secret.  (This was disturbing for a medium.)   The usual boozers in the town had gathered at The Running Sore, where the publican was dyslexic, to watch the episode on the giant plasma screen.

Philip Mould looked nervous as a restorer chipped off the varnish with a miniature scalpel. Paint flakes were analysed and were disappointingly said to be acrylic.  Then the picture was put inside a medical scanner and a face emerged from beneath the tar- a ghostly doppelganger.  Fiona Bruce was mopping Mould’s brow, when a patch of turquoise became evident.  More scraping took place and then the radiographer exclaimed:

My aunty Doris had this in her dining room in the Sixties.

My gran had it in her sitting room.

Philip Mould recognised it immediately as the most common portrait that had ever appeared at car boot sales in the country :

The Chinese Girl by Vladimir Tretchikoff

Someone- Sonia’s late husband, perhaps? – had painted it over in a competent, but amateurish way.  The author of Sleuth: The Awesome Quest for Lost Art Works buried his head on Fiona’s shoulder and wept.

Sonia said, I should have known! 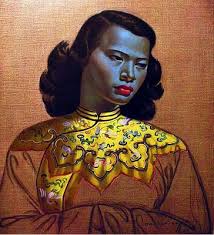 Of course, the BBC and the Fake or Fortune? team couldn’t return Sonia’s painting, as the acid had done its work on the surface acrylic paint.  She wasn’t too distressed, however.  She went to Froyle’s Auction Rooms and satisfied herself by purchasing a large mirror for £20, plus 20% commission.  She was heartened that the fees for lotting, collection, insurance and catalogue illustration had been met by the vendor.

As she was hanging it- or having it hung by her new friend, Clammie- she was certain that she caught a glimpse of a ghostly face, reflected in the mirror: it was her very own resident phantom-see previous blogs!)  The cavalier was laughing at her and he looked considerably more handsome than the Hals forgery had done.  She thought he looked a little like Philip Mould with moustachios.  Now that was something special that no one could reproduce!

In The Running Sore gastric pub most of the punters said: You didn’t have to be psychic to see that coming!

Old Sonia is no oil painting herself, quipped another.

That Fiona Bruce is a sight for sore eyes, though!

We’ll drink to that! chorused most of the males propping up the bar.