Yesterday the Husband and I had an earlyish start for the metropolis and a brisk walk from London Bridge to Tate Modern, heading for lunch in the restaurant. 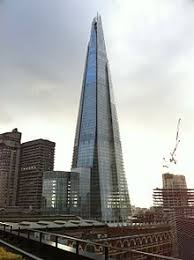 We were seated on the Shard side.  Is this tower complete?  Maybe it is meant to end in a poppering pear, split seed pod effect.  There are cranes and a vast building project behind the gallery.  At least we weren’t on the riverside, spectacular skyline or not.  On a previous occasion I was privy to a bird’s eye view of a dead body being fished out of The Thames by a boat-hook, though no one else seemed to notice.

Munch would have, I thought, as we forked out £15 each, stifling a silent scream, in order to view the exhibition The Modern Eye.

Come to think of it, I could have painted a modern version of the iconic painting by placing the figure on The Millennium Bridge.  Bit late for this year’s Turner Prize, though. Must copyright the idea.

Yes, what it is to be an angst-ridden artist.

Apparently Munch’s bohemian friend, Jaeger, used to publish parodies of the Commandments, such as:

Thou shalt write thy life.

Well, dear Hans, I have obeyed your injunction in this very blog.  Could it be an art form?  Candia’s face is slowly emerging from the chiaroscuro in the manner of early Munch woodcuts, but without the self-mutilating gouges, one hopes.

She devours pretentiousness, including her own, with the ravenous appetite of a vampire and refers to herself in the third person. Her re-workings of raw emotional pain are endless.

Munch regarded his paintings as his children, in the same way that Candia labours-or should I revert to the first person? – in the way that I (oh, the vulnerability of stark honesty) labour to bring to the birth these very posts, with their unusual perspectives and exaggerations. (Even I am becoming confused over personae.)

I too catch my figures in chance poses, or portray them in motion, stepping towards the reader in cinematic fashion.  Like Spartacus Chetwynd, I could animate them through my own carnival troup, or would I merely become a latter day odd man out presenter, such as Keith Chegwin, alias Cheggers?  No Turner Prize possibility in that case.

In my blog I attempt to recreate the Kammerspiele Theatre, just as Munch did in his naturalistic designs for the set of Ibsen’s Ghosts.  This shared style is adapted to the investigation of psychological intensity.

Am I suffering from delusional grandeur?  Do not answer that.

The constrained length of my average posting is brilliantly suited to the claustrophobic effects which Munch endeavoured to create.  He saw the stage as an enclosed room with one missing wall, which enabled voyeurs to peer inside.  The other three walls entrap the actors.

In the same way, in a few paragraphs, I display the foibles and follies of my fellow-Munchkins and prevent the reader from escaping.

In Death of a Bohemian, 1925-6, Munch shows his friend, Jaeger, surrounded by hallucinatory figures and the films record street scenes, traffic, friends and even his own image, just as I attempt to do, even down to a shared  idiosyncratic jerkiness of vision and haphazard chronology.

Munch lived in relative seclusion, but followed current affairs through the media and he created a body of work which responded to local, national and international events, just as I do.  But would he have discovered humour in current re-workings of his paintings which show a bald Mo Farah screaming on the bridge?  You see, Candia can allow such variations and indeed delights in them. 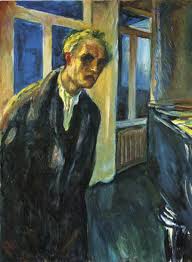 Like his self-portrait in The Night Wanderer, I find myself, or Candia does, in a similar position-ie/ condemned to spend the hours of darkness as a gaunt insomniac, enduring hours of anguish in order to produce art for the masses. I will make a Gratende Kvinne out of my weeping.  And will the public be grateful?  No, like gannets- nay, fulmars- they are inclined to project my carefully pre-digested pap back into my face, like vicious chicks punishing the lonely alpiniste of the world’s cultural sea stacks.

I don’t want to die suddenly or without knowing it.  I want to have that last experience too.

And more, much more than that, we will share every last minute with you.