Listening to the news at 1am, I tried to filter out the depressing latest bulletins from Syria. 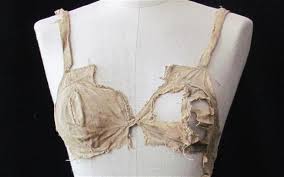 I perked up, however, when I caught a snippet about fifteenth century linen bras having been discovered in a Tyrolean castle.  It proved, apparently, that this type of underwear had been in existence a couple of centuries earlier than had been previously thought.  The next item was introduced as a world briefing, without anyone noticing the connection.  You would have thought that John Humphries would have latched onto the pun, but he might have been sparing Sarah Montague’s feelings. Goodness knows why: she never spares anyone.  He usually is quite good at masking James Naughtie, as the latter often commits a terminological inexactitude, as when Lady Steel ( wife of Liberal, David) aka the granny with the jaguar tattoo, was on the programme.  Naughtie commented on the fact that one headline had said the tattoo had been a sudden revelation for her seventieth birthday.  He wondered if they could get a photo of it for their website, if it wasn’t in too delicate a position.

Lady Steel affirmed that she had not had it done precipitously and he then “naughtily” quipped that she wasn’t hiding it under a bushel, was she?

Probably Naughtie is more comfortable with discussing the Edinburgh Tattoo. Mind you, his weather reports from The Festival sound Irish rather than Scots:

Some fog around, which you will know about, if you are in it..

I could have shocked the nation rigid with a revelation about a septuagenarian acquaintance of mine who told me that she had decided to lose her virginity on her three score year and ten birthday.  She had then gone on to have piercing when she was eighty.  That made Lady Steel look positively demure.

John Humphries hurried to the next topic which was according to a rabbi the biggest challenge to Judaism since The Holocaust.  Someone had mooted that circumcision is basically malice aforeskin, as children have no choice in the matter and it is irreversible.  The rabbi said that if it were done, t’were best that it was done quickly. The Scottish play again.

Then it was pointed out that the Queen had had all her boys snipped, but who is to say what the effects have been on them?

I wondered if Judy Murray had taken that line too with Andy and Jamie, but didn’t want to hazard a guess concerning the Switzer.

Saturday brought some sunshine, but a threatening sky and suspicious levels of humidity came with it.  Better get the rest of the blackcurrants in before the wood pigeons pounce, I thought to myself. Pigeons were on the news this morning.  Some fancier had taken his birds to France for a race and eight of them had failed to return to the UK.  He probably suspected that a family linked to La Chasse had already baked them in a pie, or turned them into a terrine, but suddenly he had reports from the Bahamas that they were sunning themselves there. It was too far for them to have winged their way to that location, so they must have hitched a ride on a cruise ship.  Can’t say you could blame them this summer. 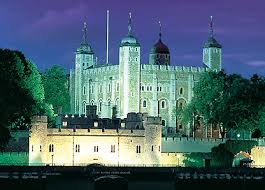 The Olympic flame was abseiled in by a Marine to the Tower of London last night, at 20.12pm, enabling Boris to make a quip about how he was reminded of Henry VIII and how it was a marvellous place to bring an old flame.  He then became too excited and over-extended the metaphor by trying to convince everyone that there would be a veritable forest fire/ conflagration or towering inferno of enthusiasm for the Games.

Evan Davis teased Lord Coe about the likelihood of getting past the sponsor spies if you were wearing a Pepsi t-shirt.  We were left with an unconvincing assurance that Nike trainers would probably be all right.  Alan Bennett could have told them that trainers mean that you are probably not fully qualified and are certainly not the type of footwear that Jesus would have worn.  Maybe that would be enough of a social drawback.

Wiggo does not like cheating or performance- enhancing drugs; he does like sideburns.  He is 6’3” and only 10 stone 6 lbs.  A belly putter would give him no advantage, even if he was a golfer, since he has a washboard for a stomach.

I considered taking up cycling for the second time that summer. Then I could eat Tesco’s Rocky Road straight out of the big black plastic tub- the one with the line-drawn glamorous woman wearing a fascinator on the lid.  There was no way that someone that resembled that illustration could possibly be associated with these calorific time bombs.

Four is an even number.  And now that one at the bottom looks so lonely…

Wiggins, sort of; Herge and err..? 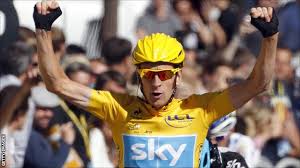