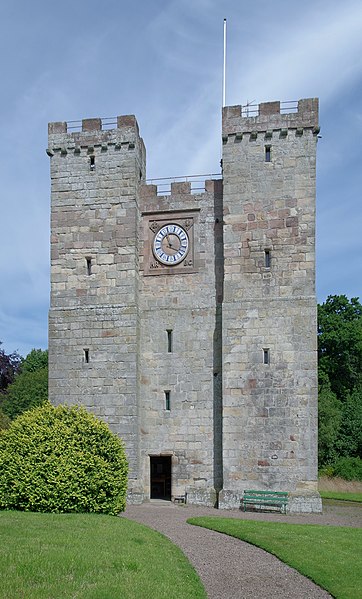 [This is a continuation of my Augustus Snodbury saga…]

Diana Fotheringay- Syylk was sitting at her scrubbed pine table in

the kitchen of her pele tower.  She was writing to the church warden,

to apologise for the mule-ish behaviour of the Palm Sunday rescue donkey,

made a dash for the appetising trimmings on Mrs Digby’s Easter bonnet.  This

had not tightened the bonds of fellowship, even though the nibbled headgear

past.  No, she- Diana- felt responsible for introducing such innovative practices

to a staunchly Presbyterian congregation.  She couldn’t help thinking that the

bonnet was a little premature and should have been left until well after Lent,

even if its wearer was the church warden.

Diana would always be a stranger here – a Sassenach.  Murgatroyd might

his restoration project, but neither she, nor her husband were of reiver stock.

Oddly enough, her erstwhile lover and the father of her beloved daughter, Dru,

was of that lineage, so she supposed Dru could trace her roots to the ‘Debatable

She raised her head and addressed her housekeeper, Mrs Connolly, who was

peeling a turnip (or was it a swede?  The two vegetables had lexical differences

depending on which side of the border they were being consumed.  Another

grave divergence.  I kid you not.)

Mrs C, what do you think Theresa May signified by ‘Brexit means Brexit?’

Mind ye, Ah usually backed it up wae a swift toe tae the….

She was trying to sort everything out for Gus and Virginia’s visit.  Dru and

Nigel would also be arriving for their end-of-term Easter break.

vows. What an event it had been, with Dru and Nigel AND Virginia and Gus

tying the tartan knot, in a combined nuptial service. Ah, so much had

happened in a short space of time.

Virginia had offered to put her own house on the market.  It had been her

previous marital residence.  She was worried that house prices might fall,

or the £ might plummet.  She and Gus were ‘Re-moaners’ and proud of it.

They were contemplating re-locating to the Borders, now that they had both

retired from St Birinus Middle.  The problem was that they did not know on

which side of the border to settle.  For this reason, the Debateable Lands

attracted them, in order to hedge their bets.

Dru and Nigel both had accommodation at their respective boarding schools,

but they had been keen to renovate some outbuildings in the pele complex, as

a way of getting themselves on the housing ladder.

Diana was keen on this, as she felt Dru would only conceive when she was away

from the stresses and strains of teaching.  Grand-children were on Diana’s

agenda and she liked the idea of them being on site.  If things became too

riotous, she could always retreat to her fortified bastle and barricade herself

Should’ Sturge’ effect Independence, then to which Csarina should they render?

half of his complex?

Diana had an idea.

Mrs C, what if we were to transfer all the property to you – you know, put it

in your name?  If we only had permission as foreign residents to live in

the country for a proportion of the year, we could move the furniture

to the other side of the room; stay over there and you could call us your guests.

Northumberland, so she’s practically a migrant hersel’.  An’ some o’ her pals

look like aliens tae, if Ah say so mahsel’.

Onywise, when Dru has her wean, we can put the whole shebang into its name.

If there is ony Border Control, we will make a killin’, sellin’ haggis, shortbread

and whisky oan the Black Merkit. if they come to inspect, or patrol oor border,

we’ll jist drag the boxes ower tae the far side o’ the room.

But no one down south likes haggis, Mrs C…

And her eyes swivelled significantly, as she directed her stare to the other

side of the kitchen.

Mebbe we can dae a trade in barrels o’ pickled herrin’ tae.