I have produced my own Stations of the Cross– fourteen in number,

which is traditional.  However, I have omitted the three ‘stumblings’

and Veronica.  I think I follow recent Roman Catholic editing on

into a Resurrection.  I think that would be more of a Via Lucis.

( I am not a Roman Catholic, so feel that I can be more independent in

my artistic endeavour.)  I don’t start with Gethsemane, or The Last

Supper, or Judas’ betrayal, or Peter’s denial.  My idea was to concentrate

the moment by creating 14 lunes, a variation on a poetic form invented

by Robert Kelly, which I have read about.  I use 3-5-3 syllables, so my stanzas

Anyway, see what you think:

stripped Him; mocked Him with

‘King of the Jews’

He gave up the ghost. 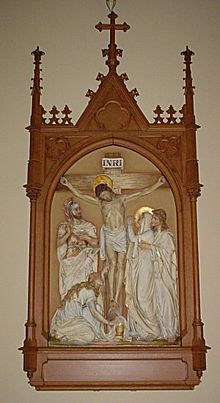 Joseph had Him placed

neck in a halter-