Diana turned her head, like an owl swivelling its neck.  She had

prepared herself for the inevitable change that she must find in

Augustus, but she had to adjust her facial expression.  He wasn’t

the only one for whom the bell had taken its toll.

They hugged, embarrassed, not knowing how long to

maintain the embrace. Then Diana pulled away and walked

forward,  into the pub proper.  He followed her to the reserved

table in the window.

He couldn’t keep his eyes from her, but was trying not to stare.

Her figure was still firm after all those years of coaching lacrosse.

He could feel his own Falstaffian belly sagging against his thighs 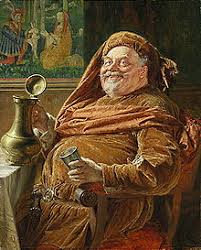 They ordered crab soup.  He kept reminding himself of the

quotation beneath his photo in the school magazine: a god

amongst mere mortals.  The trouble was that he had failed to

detect the irony, as it actually prefaced the quotation with: he

thinks he is.. It had also drivelled on about his formidable

reputation as a Classics scholar.  Who did they think he was –

an emphasis on the Tum. Still, he summoned the memory in times of feeling inadequate.  It

usually made him feel worse.

a large envelope from her designer handbag- actually bought in

Shepton Mallet at a seconds store in the Clark’s Village, but it

gave the intended impression, she thought.  Small woman with

ridiculously over-sized bag. Wonder she doesn’t give herself

when they saw her struggling with it.  I bet it costs her a bomb in

People can be so unkind.  But Diana was there to atone for her

past omissions and commissions.

She passed the envelope across the table.  It was full of photos of

Drusilla’s prizegivings, gymkhana competitions, a record of her

Confirmation and driving test results-all four of them.  It had

copies of her swimming certificates (100 metres), a cloth badge

costume.  There was a  mounted page with her A-level results and

Oh, she only got a merit, he observed to himself, fortunately.

Doesn’t take after me in that realm. He felt a little more confident.

There was one respect in which she clearly did take after her pa,

however.  The Snodbury jowls were very much in evidence, so

there was no question of a DNA test being necessary.

Yes, he said, looking at a photo of Drusilla when she had been a

bridesmaid at the age of fourteen, I suppose she is my daughter.

Diana, slightly ruffled at the very suggestion of any doubt,

snapped: Is the Pope a Catholic?

Well, he seems to have had enough of it all and has resigned,

hasn’t he?  So where does that place him? He seems to be copying

The Archbishop of Canterbury. They’re probably all C of E.

Diana’s expression was hardening.  She was beginning to recall

how much she had disliked his facetiousness.

But don’t worry, I will accept my responsibilities, to the bitter end.

Bitter end?  That’s good of you, she said caustically. No, I don’t

require a coffee.  She waved the waiter away rudely.

Father! exclaimed Drusilla.  She had been waiting outside for

some time in the car, until her mother gave her the signal from

the window. Augustus had wondered why she kept flicking her

was it Swansong at this age?

Everyone looked at their table and overwhelmed by the enthusiastic

filial welcome characterised by the rumbustiousness of the daughter

of a once fearsome lax player, Augustus knocked the shagreen box

onto the floor and, to his chagrin, the ring fell out and

disappeared down a gap in the floorboards.  It would take

someone with very long arms to retrieve it.  Maybe it was a sign: