“Sometimes the old ways are the best..”

With everybody talking about Daniel Craig’s wet shave with a cut throat razor in Skyfall and sales escalating by over 400% for some products at The Shaving Stack, the UK’s leading online retailer of shaving gear, it reminded me of my never-to-be forgotten viewing of my childhood hero’s personal grooming routine.  He was my next door neighbour and an old soldier. It wasn’t executed by Bluebeard’s Revenge, but it was, nevertheless, rather thrilling to watch.

Four years old and privy to the ritual,

I waited at a respectful distance.

sacrament, which unctioned his existence.

First he stripped to dazzling vest, braces down,

dangling by his sides.  Next came bristle brush

oval of Pears soap.  Hot water did not rush

at his methodical pace.  Lathered foam

creamed the razor’s rasp to a face that glowed

obscured the mirror and he strained to see

a tiny nick and with determined gleam,

snipped my focus of curiosity:

Satisfied, he rolled both ends with a twirl,

at eighty five, with a style-conscious girl.

Who knows what previous close shaves he’d had- 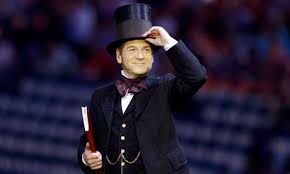