I saw something rather moving this morning, I remarked to Brassica.

Yes.  In the cathedral.  We had just taken Communion and I was reflecting

on the prayer of humble access we had just voiced before going forward.

Yes. (Brassie should study the latest marmoset research on turn-taking)

..to gather up the crumbs under your table, I expounded.

I suppose that means we are all unworthy, but God is merciful, she elucidated.

Right. Sort of.  But I started to think of the Syro-Phoenician woman who

countered Christ’s challenge, proving her faith, when she said that even the

dogs could eat the crumbs that fell from their master’s table.

Oh.  Well, that was all about the inclusion of the Gentiles, wasn’t it?  Gentile

dogs and all that..

Yes, but then I looked up and there was a lady being led by a guide dog, right

up to the communion rail.  She knelt down and the dog sat beside her.

The bread came round and then the chalice.  But I was disappointed.

The chalice bearer passed over the dog.

But you can’t give holy things to dogs, can you? Isn’t that from the Bible can you say that a dog attends?- a service in St Peter’s Anglican Church and

the lady vicar gave it some of the consecrated host.  Parishioners complained

to the bishop.  A guy called Terry Mattingly has written all about it from some

So, what did you expect the chalice bearer to do? Brassie religiously enquired.

I thought that they might have patted it on the head and blessed it.  St

Francis would have, I’m sure.

Well, maybe next time they will have had a chance to bring the subject up

at a Chapter meeting, suggested Brassie.

Yes, I mused.  Maybe like in Animal Farm where there is a vote cast as to

whether rats are comrades, or not.

Hmm, countered Brassie.  But you know what happened then.  Those who

dogs, I nodded.  Thank Goodness that we have the same Lord! 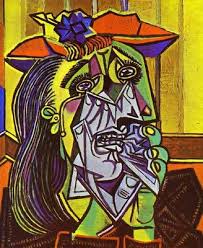 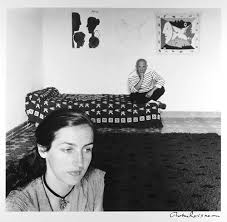 I drew breath within days of Max Beerbohm;

by the age of seven, was out of it.

Consumption led to love of sumptuousness:

I posed with crossed legs and the steam engine

I imagined never ran out of puff.

Later I quipped that I had caught a cold

by venturing without my stick’s tassel.

I worked at night with my gold nib by light

under my Mantegnas and crucifix.

I felt an irregular birth, a spawn

of Satan, unlike Mabel, the princess,

whose throat I felt like slitting in our plays:

the dramatics of decapitation!

Algolagnia was then just a word.

I was the Abbe- dandified hero,

who quelled the mutinies of my cravat

and jabot prior to entering portals

I didn’t dream they would hiss of incest.

I gasp my last at twenty six years old

under a hanging Christ and dear Wagner.

Smithers, will you obey my last wishes

as Jesus Christ is my lord and my judge?

I hope He will not judge in black and white. 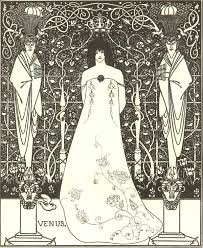 in our assumption they will bear our weight,

and now stand face to face with Christ, St. John.

The babe recoils from His prefigured fate.

A goldfinch holds their- and our- attention.

This is that same bird whose blasphemous theft

of berries from Messiah’s thorny crown

drew scarlet beads from His brow: all this left

to our imagination and not shown-

a veil not dragged right back, but partly drawn.

And marble’s own epiphany, eclat

provides the nimbus we rely upon,

hallowing all with a magnificat.

We seem to stand upon mere reflection,

art aiding in us the visionary;

summoning faith in His resurrection:

elevation from the ordinary.

Our souls are gradually teased, released

as we feel translucence behind stone’s chill.

In a blink we find wonders haven’t ceased

and the master chisel is not yet still.

who grapple to achieve transformation

our striving eases in adoration.

Contemplating heaven with feet of clay,

we find relief; moulds break and fall away. Each day a page is turned

in the illuminated history of mankind:

They defined the indefinable and

Spiralling through the centuries

their stories came to us –

or handed down orally by bards

lying on their backs on badger skins.

stones on their bellies.

Their recitatives were not repeated.

Horse and jewelled scabbards were their reward

for panegyric and piercing keening,[iii]

paradigms of the perplexity of life.

preserved bodies in barrels of honey,

were buried in shafts.

Their ground was rocked by godly couplings,

whose progeny metamorphosed in the manner of Maeve.[vi]

became Christ of the Cross –

Each high cross an amended menhir,

the face of Lugh surrounding the Son of God. 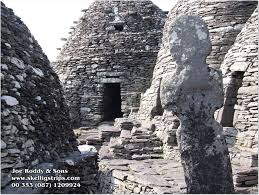 Driven to extremities, they sat in Keltoid desolation

the raven of doom perched on their shoulders,

or passed to Hy-Brasil, like Brendan, in a golden boat.

sailing towards the afterworld

through unfathomable Time, towards their Quest.

[i] The Book of Kells in Trinity College, Dublin.

[ii] Etain was a princess, the fairest in Ireland, who was changed into a butterfly and blown across the land for seven years.

[iv] Selt – a pre-historic blunt instrument, from which the Celts are thought to derive their name.

[v] Wicker men – huge hollow constructions of reeds in the shape of a human figure. Packed with human sacrifices, the Druids set alight.

[viii] Out of the East came light.

Maybe it is time to be more serious and to share a poem about Otzi, the Iceman, which was one of the first poems that I wrote.  It came to me just after his discovery and before he was named, or a film had been made about him.

Man walked on the Moon.

Humanity reduced to a research possibility.

Viburnum arrows and an ashen bow

to become a picture on a poster or a commercial quid pro quo?