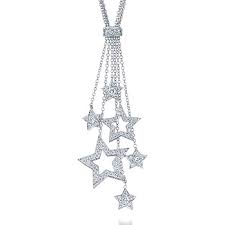 Brassica had peeked.  She knew that she shouldn’t ought to have, but she had.  And now she would need to pretend that everything was a surprise on Xmas morning.  She felt ashamed that she had doubted Cosmo.  All right, he was limited in his imagination re/ most of the presents he had hidden in the observatory, but when she had sneaked a look in one little box which he had not yet wrapped, she saw a Tiffany Multi-Drop Diamond Stars pendant in platinum, which she knew was earmarked for her.

She was also humbled by the realisation that all those mystery boxes had contained copies of a book that he had written- From Red Giants to White Dwarves , by Cosmo Willoughby.  There was a dedication to his darling and infinitely patient wife, Brassica and to his heavenly twins, Castor and Pollux, without whose support all of this would not have been possible.

(She was glad that I had dissuaded her from bidding for a diamond ring at the auction, she told me later.  All things come to those who wait.)  Some of us just have to wait longer than others, I mused, philosophically.

Rummaging around a little more she found presents for the twins: a Celestion Skyscout Personal Planetarium; DVDs of Prof Brian Cox’s The Wonders of the Solar System; Laser Stars which would project stars and floating blue clouds onto any room through holographic technology; an Oregon Full Function Weather Station WM R80, which included  monitoring of moon phases;  3 Celestrion Neximage Telescope Camera watches for residents of the Northern Hemisphere only, presumably to track what constellations were available for watching; Starry Night Software from www.starrynightstore.com/stniso.html.  There was also a lovely framed Van Gogh print of the yellow cafe with the stars overhead and a retro CD of Vincent. Oh dear!  What was she going to get him?  Maybe she could look into a promissory note to send him off as one of the first space tourists?  She had better Google Richard Branson and SpaceShipTwo. Oh yes, wasn’t Sarah Brightman down to go on one of these trips?  She would check her out too.  But Andrew Lloyd Webber’s divorce settlement may have helped the erstwhile member of Pan’s People to stump up the $200,000, or more, fee.  And, she had heard that there was a queue of 80,000 people waiting to leave Planet Earth.  So, maybe she would just organise a zero gravity Red Letter Experience for him, if they did an astronaut one, or if the business was still extant.  She seemed to remember that somebody had mentioned that the company was now owned jointly by Theo Paphitis and Peter Jones.

Heavens above!  She had better get a move on.

Carefully replacing every piece of packaging, she crept out of the observatory and carefully padlocked the door.  Then she went into the kitchen cupboard, found a duster and went back and wiped the doorhandle.