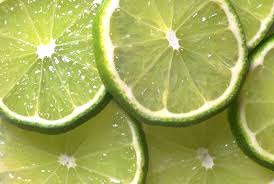 What on earth will I cook tonight? I thought, rushing up

the road to Tesco Express.  Let’s see, we have had lamb,

Arborio rice. What ingredients do I need to buy?  Ah, a

What! Thirty five pence for that tiny green agrume!

Well, I am not the only one to moan about the price of

No doubt, on paying for it, you would have a face that would look

as if you had sucked its larger yellow relation. Morris said that Australians didn’t know that they had

it so good, as there has been no recession Down Under and

the drives of urban  rednecks, or cashed up bogans are often

full of boys’ toys which demonstrate this particular species’

Unfortunately she felt that being able to afford garnishes for

hand with a display of common sense. She considered that the

moneyed do not always have a wealth of education to match.

Note that she said that, not me!

Anyway, with no sunshine here, I have got to stump up, or

I will probably succumb to some kind of deficiency.  However,

a lime, so maybe I should just buy an unripe lemon, or a plastic

one and squirt the liquid into the risotto when no one is looking.

I was recounting my experience of rising prices with Carrie in

Costamuchamoulah café. We are not cutting back on caffeine yet.

She was moaning about the price of having her windows cleaned.

You could just clean them yourself with newspaper and vinegar, I

She looked at me as if I was mad.  Vinegar smells, she said.

Well, use lemon, but don’t clean them in sunlight.

You’ve just told me the price of citrus, so how many would I need?

Okay, I see your point. My chap has put up his prices too and

of the house as it was too slippery to put up the ladder, I deducted

a percentage of the cost.

That was bold of you, she remarked, but what did he say?

He said he wanted a cup of coffee then, with four sugars.

They all are, I agreed. Different if you offer. Then I thought

that as coffee is expensive, I’d charge him £2.50 for every cup

that he wheedles out of me.

Good idea, she said.  That’s quite cheap compared to here.

Mocha and charge him one pound more. Or, –now she was

becoming excited – you could put a few mini-marshmallows

on top and have your windows done for free.  Unless we have

more quantitative easing, we will all be going back to barter.

Imagine Kirstie Allsopp’s next programme. She is capable of

showcasing herself as a kind of expert on haggling: ‘If I give you

a crotcheted egg warmer, will you replace the tile on my

There have already been quite a few programmes where

so-called celebrities try to hassle people to give away their

goods for next to nothing, I observed.

Yes, and apparently, when the shop owners and dealers see the

television cameras coming now, they lock their premises, or flee.

Hmm..I replied. I don’t think barter would work somehow. Even

for Kirstie. I think it would alienate my window cleaner.  He told me

more. I replied that qualified and experienced invigilators of public

exams with multiple degrees and years of teaching experience earn

less per hour than a Suttonford dog walker. I was trying to get him

So did it have an impact?

I don’t know, but I felt better when I only put three spoonfuls

of the old Demerara into his mug.

Do you think that you are becoming bitter? she asked, sipping

No, I have just reached the age when I could teach my grandmother

to suck eggs and, if I look as if I have sucked a lime, well, it may be

Well, be careful, Carrie advised.  Remember George Formby.  In his

song he made the point that window cleaners get to see a lot.  They

could blackmail people.  Here, for instance, neighbours would

love to know if you hadn’t made the beds by ten o’clock.

Do you make yours by then? I asked.

Don’t be silly, she said.  My cleaner makes ours.

Don’t you worry that she will gossip about all your business?

Of course not.  We pay her protection money.

So, maybe my coffee bribe is a good idea?

I’d say so.  And, if you want to be kept out of the town limelight,

a Christmas bonus would be a good idea too. Make a tangible

commemoration of the anniversary of his first visit and offer to

carry his buckets and chamois to the van.

Maybe I will just do them myself from now on.  Then I can afford

the odd spurt of acidic.  In fact, I feel a large G and T coming on

at the very thought. Anyway, if you think about it, it rains so much nowadays, that

there’s little point in doing them at all, mused Carrie.

I’ll drink to that! I said.  After all, Jane Austen and Dorothy They weren’t known for wasting their time, writing silly