A re-blog as it is timely: 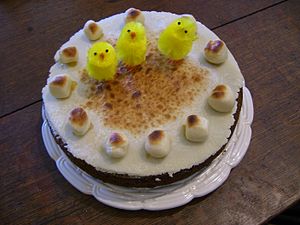 Costamuchamoulah cafe was still doing a brisk trade, even on this

grey day.  Amazingly, the smokers were still prepared to sit outside.

We have the routine down to a fine art now: one gets into the queue while

the other nabs a table, much as the disciples snatched a colt.

Yes, Easter’s early this year, I commented, watching a child stuff its face with

a Creme Egg in advance of the Christian calendar.  It’s amazing how such

into such a tiny aperture.

I bet they don’t know what Simnel cakes represent, I mused aloud.

What do they stand for? queried Carrie.  Then, seeing my expression, she

added, I’m sure I once knew.

That’s what I say during University Challenge, I replied.

Then I sipped my Mocha, getting a chocolate powder moustache.  You know,

it’s Palm Sunday tomorrow.  Are you going to go to a service?

Try persuading that lot to get out of bed, she sighed. They used to like to see

the donkey coming into the church, though.  Sometimes they were convinced

that The Dean, giving his dramatised reading, was Pontius Pilate and it scared

Yes, we used to go to Salisbury for the service.  That was when Ted Heath

lived in The Close. In fact..

..you have a poem about it, she smiled.

How did you know? 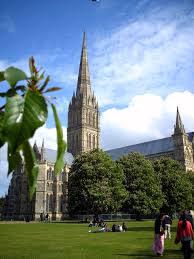 The sky above The Close is Constable’s.

under a spire as tall as Babel’s own,

and honour.. without comprehending laud.

The tallest lad hopes that his voice won’t crack.

Girl choristers have not been asked to sing today.

in tea-towels and trainers coax an ass

from a spreading cedar into the nave,

where all present pray for its continence.

on a reserved space outside Arundells.

What if one should loose its handbrake

and say, The Lord has need of thee this day?

Meanwhile we make intercession for all

while carefully noting the advertised

champagne breakfast on our service schedule.

Dom Perignon: a foretaste of glory.

The Jobseekers can sip Living Water.

Coffee will be served in the Chapter House

among the exhumed coffin chalices,

patens. The bookshop is doing business

in postcards of Julian of Norwich:

All manner of thing shall be well. Mammon

hasn’t felt stings from His whip of cords-yet.

The head which indicates the Bishop’s stall

has a triple face of circumspection.

The Dean and his ordained wife wear the same

as they stand on repro medieval tiles,

trying not to worry about their lunch.

In the cloisters a chill wind chafes faces.

A chair is overturned, but no tables.

We stick one on Ted’s windscreen, just in case

his residential permit cuts no ice

with the flaming Being at the Close gate,

who curiously doesn’t wear a badge,

but bears authority from Old Sarum.

He tends to let the backpackers pass through,

or as camels accessing a needle.

But Tory Faithful have to wait in queues,

backs turned to the Celestial City,