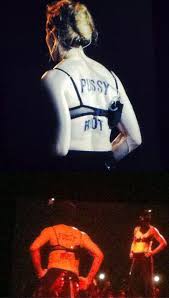 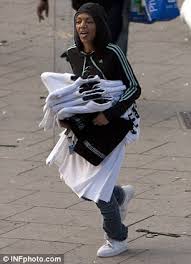 The Olympic torch had been practically blown out on the South coast today.  I could not understand why all those people, including inmates of old people’s homes had been hurled out in their wheelchairs to wave at people in synthetic, white, untailored suits, who brandished perforated Dunce’s caps, or metallic Cornettos. I could understand why some drawing pins had been strewn in the path of the Tour de France.  It was just so boring.  I did think that if everything was about positive discrimination, then the collective conquerors could all finish at the same time and have a certificate that said how well they had done to take part.  It had been pretty sporting of Bradley Wiggins to let the others catch up after they’d been stopped in their tracks, or tacks, as the case may be.  But, if everyone slowed down to give others a chance, even those with stabilisers, where would be the glory of a maillot jaune?

The thought of being able to consume 8,000 calories daily and still to look as slim as Wiggo and to have a pert little bum that looked good, even in lycra, made me wonder where the nearest velodrome was.

Yes, the French love their Tour de France, but yesterday I had been reminded of their storming of the Bastille, which put them in a rather poor light.  I debated whether six weeks of rain was preferable to six weeks of Terror. There had been  an opening if ever there had been one for Kirstie Allsopp to have created a nation of tricoteuses, or basket weavers, to contain all those untidy heads.  She could have published a recipe book for brioche since the poor common folk experienced a shortage of pain artisanale. I could just see her on the cover, dressed as a shepherdess and photographed in soft focus in front of Le Petit Trianon.  She could keep Phil in order with her crook.

Sian Williams spoiled my reverie as she couldn’t pronounce Juillet.  However, she is probably Welsh and we find it impossible to pronounce their words, so I suppose I mustforgive her.

Grayson Perry was on the programme and he surprisingly criticised French cuisine.  Their cathedrals he had praised, however. I bet that he would have welcomed a place on Kirstie’s book cover.  He loves the Little Bo Peep look and could have asked for a share of the royalties.

Perhaps if the Jacobins had restricted their protests to scattering a few tacks before tumbril wheels in the modern French spirit, fewer heads would have rolled.  On the other hand, the thought of Sarkozy or Hollande receiving a surprise bath time visit might cheer a few EU refuseniks.  Allons, enfants!

The previous evening there had been a rather silly programme which tried to divide our nation into Cavaliers or Roundheads.  Ann Widdecombe was clearly of the Cromwellian party.  In her Puritan mode she said that she couldn’t understand why her fellow female competitors on Strictly wore so little. (Well, they might have been equally confused as to why she was on the programme at all.)  Weren’t they cold? she’d wondered.  Immodest Ann is not. 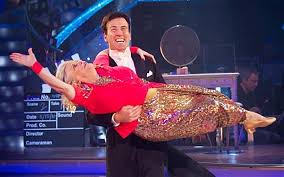 However, when it came to the abolition of Christmas by the Parliamentarians, she was- roundly?- on the side of the ringleted Lawrence Llewellyn-Bowen.  He loves decoration and probably knows how to pronounce Juillet, even though he is of Welsh extraction somewhere down the line.  As would a scholar such as Ann, I added.  I wouldn’t have fancied Marat’s chances if Widdi had wangled her way up the back stairs with a newly sharpened Sabatier, modestly dressed or not.

I was intrigued as to whether the nation’s favourite  Terpsichorean MP would consider Grayson Perry, as Clare, overdressed.

When the Turner prizewinner does not like one of his pots, he smashes it, but has taken to gathering the little ceramic fragments and places them in reliquaries that he has assembled in workshops in India, so that we can all afford some of his art.  Again, Sian didn’t seem to know what a reliquary was, but Widdi would not have had to phone a friend.  So, gratifyingly, shards are in. Just as well, after what we have spent on that giant example.

And still the stuff comes down!

Some neighbourhoods in Switzerland have joined together to force a farmer to have the Alpine bells removed from his herd of cows.  Maybe the noise was keeping Roger awake.  I thought that they should come to Suttonford, where my neighbours would make the farmer’s bovines seem like Trappist monks.  If Wiggo had been whizzing down a mountain track near Roger’s chalet, -pre-match- he might have had to muffle his clapper if a goat had strayed onto the road.  The reporter was Bethany Bell, which amused me, even if it was an early item and I wasn’t quite awake.