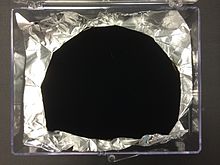 to be drawn to Vantablack;

of consciousness, as the man

who plunged down a hole,

some will interpret the world