That reminds me, I said.  I once wrote a ballad about Santiago de

Compostela.  I’ll post it on the blog as there has been nothing but

bad news lately and not much to fairly satirise, so I’ll look it out and

give it an airing.

Good idea, replied Clammie.  We haven’t had one of your poems for

This one is just a lightweight narrative, but it was fun keeping to the

ballad metre.  Here it is:

THE BALLAD OF CAMPUS STELLAE St James, he was a fisherman,

disciple of Our Lord.

he went to spread the Word.

He took the gospel then to Spain

on an ill-starred mission.

he crossed a magician.

had been converted to the faith-

he turned on James in spite.

his will was not observed.

they’d got what they deserved.

Hermogenes instead was brought

to kneel before the saint,

but H. was afraid the demons

would avenge their complaint,

and take revenge on their master.

James then gave him his staff

as a protection for himself

to ensure the last laugh.

and set off for the Med.

them to the selfsame shore

where James had once been preaching,

not all that long before.

a pagan lady there,

She would not heed their prayer.

They asked for land to bury him.

She sent them to the king.

He threw them into prison cells

on the first evening.

But God released them from their plight,

though still under attack.

Armies were sent to bring them in,

but were stopped in their track.

A bridge collapsed and killed them.

The fugitives were spared.

she asked them how they’d fared.

She commanded them: Fetch oxen,

knowing them to be bulls.

They genuflected over them,

showing they were no fools.

and harnessed to a cart,

the “oxen” played their part.

Then Lupa released her palace;

the shrine its genesis.

spared the shrine when he sacked

the town where hermit, Pelago,

told the Bishop a fact

how he had seen some stars

a place for peace, not wars. 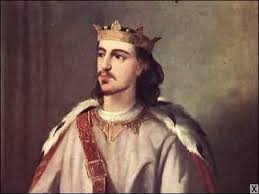 built a church on the site

and a touch from a pilgrim’s shell

then healed a goitrous knight.

Compostela and its wide fame

went down in history.

To this day penitents still flock,

in great hope that St James will save