all the birds of Oxfordshire and Gloucestershire 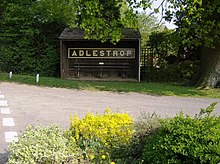 the name, because, quite uncertain,

of its precise pronunciation,

I referred to Richard Burton

or should I call it ‘Maudlin?’

was linked to the Dukes of Chandos

(Shandos?) [ note to self:  Google the Bodleian]

Now I’m getting into a strop.

It is hard to get it all off pat.

So, the present Lord Saye and Sele

shortened the whole shebang to ‘Nat.’