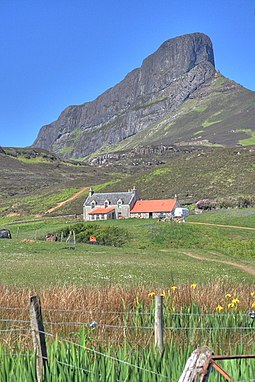 He came from Erin: leaned on his bachail

baa-ing with sheep, yet he had no shepherd –

no Anam Cara when the slaughter came.

The Queen of Moidart was not of his fold.

She roasted him in his refectory,

unwilling to respect the Lamb of God.

She took the lives of fifty brothers too,

to re-assert her power and grazing rights.

and lured her Pictish women up the slopes

to Sgurr of Eigg.  At Loch nam Ban Mora,

her warriors, who waded out and drowned.

Columba, you did not want to be-friend

one destined for red martyrdom and yet

The Northern Lights received him to glory;

his abbatial staff hooked in the lost

of many a future generation.

3 thoughts on “St Donnan of Eigg”