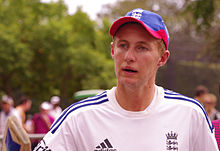 Someone’s * tweeted he’s not the ticket

and will be the shortest reigned captain in English cricket.

Might not be true – he (Joe) may redeem himself yet.