The Red Hand of Ulster, to Clyde-side kids,

was seared into psyches via covert ink,

None of us knew what The Red Hand meant, though

class-mates ran the gauntlet, after the belt

had been strenuously applied.  And so

this palm symbolised what we had all felt:

the stinging slash; the shock in the belly.

should King Billy march on Lochgelly,

Belts could split chalk at one stroke -and wrists too,

We’d fight The Battle of the Boyne anew

for all those dyslexia victims’ sakes.

Dyslexia was unknown in Scoltand-

The only way to soothe a belted hand

was to stick it in your oxter, then blow;

We’d grip a pencil stub and break its lead,

while the Commonwealth blushed overhead.

‘Sinister?’ – we grasped no heraldic lore.

We hadn’t heard how the Irish chose kings;

nor how The Hand had landed on the shore.

‘Red and green should never be seen-except

on an Irish colleen,’ it was said.

When my mother made me wear green, I wept:

blue was for Rangers; distinction inbred.

The lines on every palm are different,

whether it’s a Papist’s, or a Protestant’s.

In school we found red hands no deterrent;

we were all punished, whatever our slant.

This was essential to boost our morale,

while learning an alien agenda,

yet trauma would last through the interval. 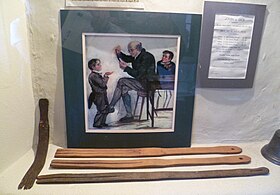