I haven’t written a sestina yet, I lamented to Brassica.

They are supposed to be good for laments, she said, somehow

reading my thoughts and mood.  Try a villanelle.  It might be

easier to start there.

So, I tried to think of a topic and turned to The Bible for those

and Esau popped into my mind and, before I knew it, inspiration had

prompted the following poem.  Maybe it is an exercise in form,  but

I hope it transmits the essence of their relationship struggle. 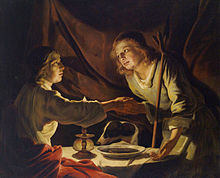 Half-blind, he mistook goat for venison.

(Mother and son were partners in the crime.)

And so he gave Jacob his benison.

Take this stew and treat him with kid gloves, son.

half-blind, he mistook goat for venison.

but Esau was a hunter in his prime.

His cataracts obscured this social climb:

half-blind, he mistook goat for venison.

Jacob knew when to put the lentils on.

An old man’s craving made him jettison

Divine will.  So, trapped like a bird on lime,

half-blind, he mistook goat for venison

and gave Esau a lesser benison.