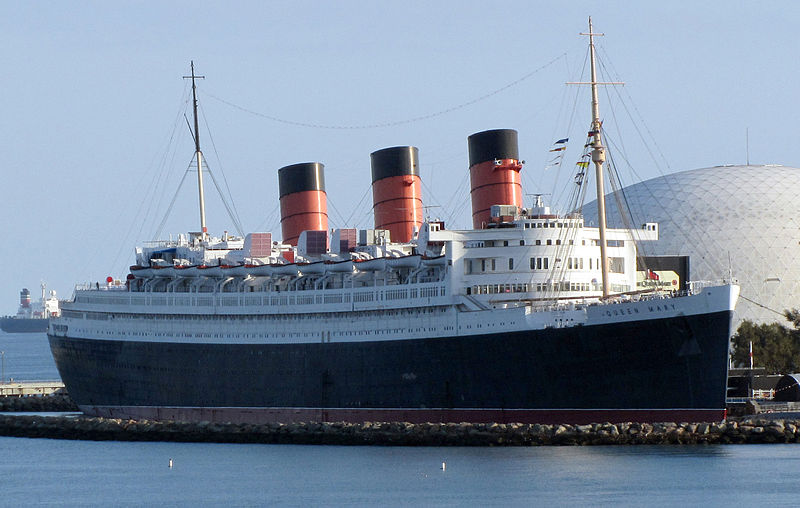 Grandfather sat at the prow of my bed,

his pipe smoke furling from a brown funnel.

Tell me again: what was the very first thing

you had to do, to build The Queen Mary?

Och, it’s all about rivets – lots of them.

Sitting up, I tucked the quilt round my legs,

replicating the outline of a hull.

We sipped tea from imaginary cans,

never ran out of steam; their flow increased.

And he would drone the deep ‘A’ of its horn.

We flitted round The Grey Ghost arm in arm,

measuring the umpteen miles of carpet;

swimming in the pool and dancing, dancing,

at The Starlight Club. What’s a Turkish Bath?

Enthralled by the bright sparks of his stories;

strengthened by many blow-by-blow accounts

of what lay beneath the dimpled surface,

I never felt held back by rusting chains.

I was swaged and took on his impressions. So,

now, decades later, I am assuaged,

having been sent down the slipway of life,

christened and launched on that maiden voyage,

into a specially widened, dredged channel,

and watertight through the symbiosis

directed my course down the Clyde and out

into the North Atlantic. Now retired,

far from home; docked like the grand old lady,

I have righted myself from past rogue waves-

listing, but not sinking, because of him

and the ballast he laid down in my hold.

Below my Plimsoll Line, when fog comes down,

I still feel the pistons of his heartbeat,

attuned to my own and powerful still.

12 thoughts on “Building The Queen Mary”