I like that song, ‘Cry Me A River’, Brassie said, meditatively.

Oh, it’s based on the phrase about carrying a torch for someone.

Mmm.  I used to think of those Cybele statues whenever I heard

Why are you bringing Cybele into it?

Oh, I just associate the over-production of breast milk with the over-

production of other body fluids, I suppose.

You’ve been going on about tears recently.  I wonder why?

Well, I was just reading ‘Women Who Run With The Wolves… I began.

You would, interrupted Brassie.  I wish she’d stop the annoying practice.

Read, or run? I countered.

Who wrote it?  She ignores me!

She’s a Jungian psychoanalyst and cantadora.  A woman who keeps old

stories.  She wrote about tears in myths melting the icy heart.  She reckons

that women cry to keep predators away.  Tears mend rips in the psyche

and prevent one from sleeping and lowering one’s guard.

I would immediately think of the Picasso portrait of Dora Maar, Brassie

commented- quite astutely for her.

Woman as a ‘suffering machine’, according to Picasso.  Did you know he

painted more than one version?

I think one was stolen from a gallery in Melbourne, wasn’t it?

Yes.  They got it back, fortunately. He always claimed not to be repeating

portray her like that.  He just said that, for him, Dora was always a weeping

At least she went down in history for something, Brassie reflected. Oh, yes-

not ‘Dora was a first rate photographer.’  Just: ‘She was the one that

cried her eyes out.’

‘Maar’ is an interesting name.  In the Old Testament the waters of Marah are

bitter and the name ‘Mary’ may be associated with tears. Jesus’ mother

certainly had plenty to cry about, didn’t she? 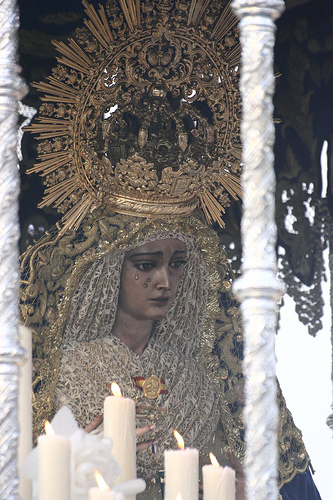 Hmmm. Anyway, I tried to immortalise Dora Maar in a little poem I wrote

years ago.  I discovered it during my cellar clear-out.  Do you want to see it?

Here!  It’s a bit crumpled and I’ve edited it a bit, but there you go…

I tried to immortalise her too, I said, taking out my notebook.  Along

with all his other weeping mistresses.  But she will always be the arch

Catalan, with beans.  She wanted her face

recognisable; to be centre stage;

Her image had by then begun to fade.

I was playing with Dora Maar (my mouse);

When Nazis asked me: ‘Did you do this art?’

I replied: No.  You did.  When black with spleen,

‘Who was it then who put me on the cross?’

I did, but, so doing, set them apart;

made them immortal in the realm of art.

2 thoughts on “Cry Me a River”