Miracle in Much Marcle 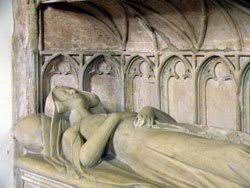 through drifted fields, where ewes have lost their lambs.

Arriving early at the church, its latch

gives mercifully and so we enter,

stumbling into a chancel of pure light.

Attention is diverted to others

who lie in a petrified majesty:

a metaphysical conceit in stone.

sleeve?  We want to gaze on serene eyelids.

miraculously wake before the end

took to sleep, shutting out her father’s death

at Tyburn; his treachery with a queen;

his complicity in vile regicide.

we’re disappointed- not as disciples

who found a luminescent gardener.

There’s no grave mole-catcher to interview.

She has risen; there has been a Rapture.

We see that her heraldic tomb has gone

in the twinkling of an eye and no cloth,

no folded linen’s there- just vacancy,

where Blanche, her sins as white as snowy wool,

blank as a virgin, slept in innocence.

We read she has gone for restoration;

almost a millennium ago.

Centuries have tolled through her long fingers,

each bead once a prayer for deliverance:

for ours; not hers, that having been achieved.

2 thoughts on “Good Friday: Miracle at Much Marcle”