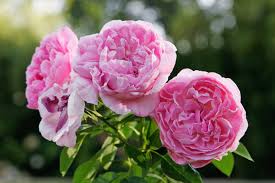 the roses had finished for this year.

I always have David Austin roses, she commented.  They are so much more

subtle- unlike some of our friends.

What do you mean? I asked.  It wasn’t like Brassie to be so prickly.

Well, one of our so-called bossy acquaintances said my Mary Rose would

never flower in a tub and it excelled itself this year.

It does look a bit pot-bound now, though, I pointed out.

Yes, but I daren’t move it, as I enjoyed seeing her reaction when it was

in full bloom.  Hopefully it will do the same next year and I can prove her

I thought this was cutting off her nose to spite her face, but it is her business,

I suppose.  She likes being a thorn in people’s sides!

Changing the subject, I asked if she had taken her twins, Castor and Pollux,

to The Mary Rose Exhibition in Portsmouth, since they have built the new

Yes, we went almost as soon as it opened, before it became too busy over

the school holidays. They loved all the bows and arrows and the wax figures.

Have you been, Candia?

Yes, I went years ago, before they built its new accommodation. We returned

to see everything so beautifully displayed. It made an impact on me- especially

the skeleton of the dog trapped in the cabin.

The ratter?  The boys were fascinated by it too.  You didn’t..did you?

Send it to me tonight, if you remember. The Master Carpenter left it ajar.

I think he’d gone on deck to take a leak.

I’d done my job and couldn’t smell a rat,

let alone catch one.  On his wooden chest

I’d spied some hard tack crumbs- just what I liked.

See, unlike me, he hasn’t got the teeth,

but biscuits, weevil-free, were quite a draw.

I’d checked the cauldron, but the lousy cook

was otherwise engaged, so no pig bones.

The ship and I- the only females there-

but gender no protection from a bosun’s stick.

He didn’t give a fart that I’d just killed

a skulking rattus that had chewed a rope.

I was two years old and had near forgot

the Portsea farm where I had been whelped.

My four sea legs were not so firm quayside;

(and that included Captain George Carew’s.)

The Master Carpenter was unlike Christ:

where I would sit, watching him roll his dice,

playing backgammon, to while away dock time,

Sometimes I would hear the gunner’s whistle

and his powder monkey would chuck me scraps,

but woe betide me if I crossed the bowmen-

and wouldn’t spare you a nit from their combs.

The door slid shut and, trapped in this space,

I yelped and sensed the whole hull start to tilt;

from the first Ave to Paternoster.

I hope the Master Carpenter escaped,

even though he’d skelped me with his holey shoe.

After four centuries in Solent silt,

it’s odd to be a sea dog on dry land.

Then only rats could leave the sinking ship.