excited as usual.  It was almost the end of September and he had given a

term concert.  I am delighted to announce that we will be performing Britten’s

Ceremony of Carols and St Nicolas. If ever there was an accessible

programme, then this is it.  Now I know that you will be wondering who the

choir will be the youthful Nicolas, as is traditional..

Here some parents looked as if they were about to vote with their feet, as

In fact, John Boothroyd-Smythe might have been a good choice as he

had nerves of steel, but his voice was about to break.

‘God be glorified!‘  He had tried to keep the delinquent on board, but when he

had offered him the part of the final member of the trio of pickled boys,

Timothy, Mark and John, the ingrate scornfully replied, Who wants to be a

The answer to that was none of the boys, particularly, but all of their parents

darlings, whether they were to be actually preserved in brine or not, for the

sake of a favourable mention in a review in the school magazine.

John’s rudeness had earned him a detention with Mr Snodbury.  When he saw

suspiciously like a hip flask, John felt that the old boy would have been first

rate as a pickled adult.

John’s interpretation of the boys as Frankfurters, or chipolatas, en vinaigrette,

metamorphosed, or resurrected bratwurst would be highly appropriate for

such a pupil as himself.

from the ranks and  longed for a recognition of their solo tenor voices.  In

short, they wondered if one of their cohort might land the part of the adult

Milford-Haven was going to sing the role of the saint, in view of his

enhanced experience which had been finely tuned– ahem!( he was aware

of his own pun) at the Bath Monteverdi workshop over the summer.

Nepotism! muttered one of the viola players, but that was to be expected

from a musician in their section.

Over tea in the staffroom the following day, Nigel raised the subject very

hostess trolley. He mentioned that he had been elected to sing the part of

the Bishop of Lycra.

Snod looked at him as if he was a first former and corrected him: Lyra, sir!

Lyra! He then snaffled the last Bourbon biscuit, which Nigel had been eyeing

throughout the conversation. Still, he couldn’t have everything, he supposed.

marvellous piece and the eighth movement is so homophobic.

He was clearly not having a good day.

Nigel considered reporting the Senior Master to the union representative

and injured feelings, but to complain might mean that his stellar role would

be endangered and it was too important to risk that.

remarked, as if nothing untoward had been voiced.

Yes, sir!  He was relieved that he was on surer footing now and sat down

beside Snod in an ingratiating manner which irritated the eminence grise.

The boys enjoyed the part where Nicolas is enjoying his bath, he volunteered.

Snod had heard that there had been one or two sniggers at this point.

We rehearsed the section where the bewildered mothers were looking for

their lost sons.  They assumed that the ‘wurst’ had happened.

Nigel congratulated himself on a very good joke, but Snod ignored it.

There’s a plethora of that type of female in the school yard, I always find.

Snod drained his tea in one-a practice he had perfected over many a break.

I don’t suppose Poskett was other than spoilt for choice. I hear he gave

the parts to the pushiest ones as usual.

I don’t know about that, Nigel practised being pontifically diplomatic, if that

I expect that you can relate to the sixth movement, as can we all, mused

Isn’t it a description of the barren years of incarceration? Snod said wryly.

Still, everyone gets their Nunc Dimittis in the end.

He was hoping for his very soon.  Pension! God be glorified!  But you will have

to wait much longer for yours, won’t you, under the new government

regulations?  Never mind- God moves in a mysterious way.  Maybe you will win

the lottery, if you say your prayers.  You should buy a ticket in our

consortium. A tenner a month, that’s all.

Is that Camelot? asked Nigel who was somewhat otherworldly regarding such

vices and, in that respect, made more of a a convincing saint than any other

Camelot? repeated Geoffrey, who had only three minutes of break left, having

collected his large bundle of hate mail from his pigeon hole, all protesting about

rising from his club chair. I once sang the role of King Arthur many moons ago,

but I leave you my musical mantle, Milford-Haven.  Even Elijah had to divest

himself of his garment so that the young Elisha could grow into his sandals. 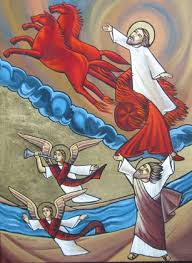 And though there was no rushing wind or cloud of unknowing, he cast a

cursory glance at his empty pigeon hole and left humming:

Don’t let it be forgot

That once there was a spot

For one brief, shining moment

That was known as Camelot..

in the old dog yet!  In fact, there was even a look of the young Richard Burton

in his profile- or was it Richard Harris?  Both were before their time.