Bagham!  The notification of a parking infringement was plastered to

the windscreen in another five seconds.

Poor Gisela had not had the benefit of the Suttonford Grapevine.

From Benares Balti to Pop My Cork!; from India’s sunny shores to

Anyway, from The Running Sore to Help the Ancient, the buzz was

Shop assistants, waiters, customers, patients from the surgery, still in their

underclothes, all flew out into the High Street like the proverbial bats exiting

Dante’s Inferno.  Much circling was done in the manner of vultures, but they

did not regard themselves as the predators.  They rode the thermals

metaphorically until the coast was clear and Boris strode into

Costamuchamoulah like Curley in Of Mice and Men, only his hand

was not softened by Vaseline. His stern fist remained in an iron

This town ain’t big enough to support me in cappuccinos, he thought.

Boris was only doing his job and he had a quota to fulfil. He did not

He recalled one irate female who had stamped her foot and said: But

what she was rabbiting on about.

the pavement and added:

Pythagoras, /That souls of animals infuse themselves/

Into the trunks of men..

Boris suddenly had a flashback and so continued writing the

Till thou canst tear the seal from off this fine/

Thou but offends’t thy lungs. I stand here for law.

Blonde 2 turned to her friend and intoned:

You may as well go stand before the beach/

And bid the main flood bate his usual height..

So he had won.  He knew all the tricks: the phoney police college

Why should some tradesman who scribbled a note: Working at No 3

and who left it on their dashboard cut any mustard?  For all he knew,

they were visiting that Melinda woman with a luncheon voucher.

No, he was becoming cynical.

Why had he taken such an unpopular job? 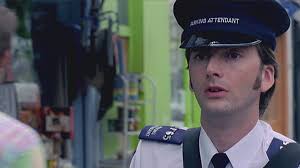 Well, he had once been issued with a ticket himself, and he had had

to go to anger management classes for ages.  Then he developed a

syndrome called Scapegoating, where he did unto others the very

thing that had been done unto him, in a reversal of the Lord’s prayer

that was truly evil, but could be explained as a survival mechanism by

people such as Richard Dawkins.

But Gisela, though somewhat down-heartened at the present

moment, was no easy touch.  She removed the notice and took out

her phone.  She photographed the road under her tyres: completely

covered in snow and no lines marking the bay visible.  She would

appeal to a higher court than Boris’ conscience, and like Portia, she

would probably win her case!

1 thought on “The Quality of Mercy”