The world didn’t end yesterday, so maybe the Mayans weren’t so

clever after all.  It was going to be curtains for some of the Strictly

contestants, however, in a few hours. Baubles, bangles, hear how they jing, jinga-linga to encourage

everyone to get into a sparkly mood. Certainly, tonight was

Most of the guests were downing bubbly and becoming increasingly

effervescent and aerated. Ginevra was ensconced in the prime

viewing position in front of the large plasma screen.  She was

Everyone was wearing enough ruffles, fringing, Bermuda and bugle

beads to keep Julien Macdonald in ecstasies till actual Doomsday.

Their scintillation would have been sufficient to have illuminated the

of the coveted glitter ball.  Of course, she was not permitted to enter

since she would have had an unfair advantage as a professional

medium.  When the twins tried to elicit a clue from her, she merely

raised her eyebrow, in a Vincent Simone enigmatic expression.

than the Mayans, but she had a greater affinity with Mother Shipton than any

South American soothsayer.  That could have been applicable to her Latin

moves too.  The twins turned away in embarrassment when she

tried to shimmy and they consequently tripped over Andy, the annoyingly

ubiquitous Border Terrier, so he was banished and gated in the

their choice hotly when teased that they were merely responding to

his lack of a costume.

Ginevra, the eminence grise, favoured Anton and had to be told that

he was not a contender. But he dances like Fred Astaire, she

retorted.  When the girls explained which dancers were finalists, she

decided to bet on Kimberley, as she thought she looked a little like

Once she had her glass re-filled, she didn’t care which programme

she was about to watch.

Carrie supported Dani; this was more to do with the dark pony’s

I decided to opt for Denise, as I felt sorry for her lack of support.  She

had been subject to some bad luck owing to costume malfunctions

and had covered her professional partner’s mental blank, mid- 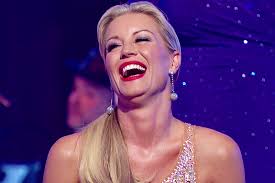 screen.  Bruce grinned: Nice to see you; to see you…

Just as everyone shouted Nice in return, there was a fragmentation

usually a mask of tolerance while Brucie lifted her leg, disappeared.

Oh no! everyone exclaimed. What’s wrong?

Cosmo was dispatched to the fuse box in the kitchen.  Carrying a

bowl of floating tea-lights, he nearly tripped on the threshold as he

tried to negotiate the child gate that had been attached to the door,

to deter the excitable Andy. A veritable Laocoon of tangled and

chewed cables was all that remained of the Christmas tree lights,

once they had been dragged from the hall. into the scene of canine chaos.  So much for thoroughbreds and

There was no fuse wire in the electrical box, so Cosmo was also in

the doghouse- a destination with which he was only too familiar.

Everyone decided to hot-foot it to Sonia’s place, which was the

realised that Ginevra was missing.  There had been nothing

problematic with her electric wheelchair, but everyone had forgotten

her in their eagerness to hiss Craig Revel Horwood’s initial

When Cosmo rushed into the sitting room with a borrowed torch, he

found her fast asleep and perfectly warm under her tartan blanket.

She had consumed the rest of the bottle of Dewlap– neat, by all

accounts.  She was alert instantly and wanted to know if she had

won the sweepstake.  Cosmo lied and presented her with an

uncorked bottle as a prize and she went back to sleep, happily

at the Dennistoun Palais and Barrowland in Glasgow, with her first But who had really won?