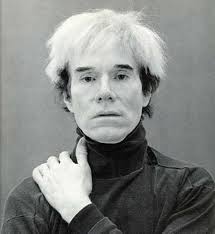 Jerry Hall’s drawl tells you what you should think;

lets you know that he did her portrait too.

For twenty years he consumed the same soup –

Think what he could have done with Heinz Baked Beans.

But what did he love more than anything?

Money.  His friend charged him for that response.

He took the piss out of Jackson Pollock.  (Literally).

yet had no point of view.  Presentation

was all.  He left his camera running.

Its film ran out before he was ready,

but the party reviews were terrific.

From his silver-foil shimmered studio,

he said, “I’ll be your mirror” and balloons

and shadows became Rohrschachs of the self.

Chief dog of the hungry bitchpack, his wigs

His intimacy on the telephone

from the Twin Towers, but who called home first.

Though voices were brief and bright as flashbulbs,

their stark images were stamped on our screens.

The body hanging from the ambulance

and the tuna-poisoned smiling victims

did not surprise him.  Even the sneaker

beneath the tyre had to be repeated.

fifteen minutes of fame in the world’s lens.

He could have painted her a thousand times.